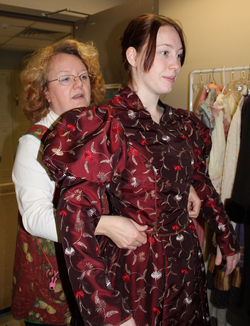 NACOGDOCHES, TEXAS - The norm in educational theatre is for the most experienced actors to be cast in the leading roles of major productions. But in Stephen F. Austin State University School of Theatre's upcoming production of Anton Chekhov's "Three Sisters," the vast majority of the "bigger roles" are being played by freshmen or sophomores who are making their Mainstage debut.

"For the most part, they're young and inexperienced, but I cast on the basis of the auditions," said Rick Jones, SFA professor of theatre and the play's director. "They're all smart and able to handle the challenges Chekhov's script demands. I'm thrilled with the cast."

The students attribute the success of their portrayals to the knowledge and direction they have received from Jones and the instruction on movements and mannerisms appropriate to late 19th century Russia offered by Juanita Finkenberg, theatre adjunct faculty member.

Additionally, two seasoned actors, SFA Assistant Professor Jason Davids Scott and SFA Visiting Assistant Professor David Studwell, are also members of the cast, and they "have been able to help the students hone their characters," said Frierson. "As scene partners, they listen and react with such energy that responding at their level becomes almost effortless."

One of the challenges of performing a play by Chekhov is that the actors must carefully study the script for subtle references and infer for themselves what's going on inside the characters, explained Studwell. "These students are very sharp; they pick up on concepts and direction quickly."

A workshop given by Rhonda Blair, professor of theatre at Southern Methodist University, was particularly helpful in this area because she focused on how to be an actor in a Chekhov play, explained Jones.
Blair is the translator of the playscript Jones is using for "Three Sisters" and an expert on the Russian playwright.

The actors agree that the play has universal appeal. In fact, anyone in a family will enjoy it, said Scott. "This is a play about how we care for each other and accept each other even as we fail and disappoint each other."

The School of Theatre will present "Three Sisters" at 7:30 p.m. Tuesday, Feb. 28, through Saturday, March 3, in W.M. Turner Auditorium, 2222 Alumni Drive. The production is part of the College of Fine Arts' University Series and is sponsored in part by Tipton Ford-Lincoln of Nacogdoches.