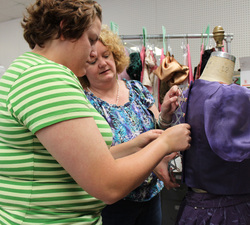 SFA Associate Professor of Costume Design Angela Bacarisse shows Houston junior Megan Thomas how to equally space the buttons on one of nearly 60 costumes to be used in the SFA production of Giuseppe Verdi's "La Traviata." The opera will be presented at 7:30 p.m. Thursday, April 19, through Saturday, April 21, in W.M. Turner Auditorium.

"The elements of love, duty, sacrifice, death and redemption are all found in the story line, and SFA's finest student vocalists will be singing the glorious score in English. Additionally, supertitles will be projected above the stage for the audience members who would like to read the libretto as it is being sung," Dalton continued. "It's a perfect opportunity for experienced opera goers as well as first-time attendees."

The cast of over 40 vocal students and a 30-member student orchestra will present the opera at 7:30 p.m. Thursday, April 19, through Saturday, April 21, in W.M. Turner Auditorium.

Based on "La dame aux Camélias," a play adapted from a novel by Alexandre Dumas, the opera revolves around Violetta, a Parisian courtesan who is stricken with consumption, and her suitor Alfredo, whose father is opposed to the union.

Dalton said she is pleased with all elements of the production. "The voices and the singing are among the finest you will hear anywhere, and the set designed by SFA Assistant Professor of Theatre Dana Gloege provides a unique look for each scene with Art Nouveau opulent colors and patterns."

"Because the cast is so large, we rented most of the costumes," Dalton explained. "But costume professor Angela Bacarisse, along with shop manager Barbara Blackwell and the costume crew have built several of the ladies' gowns. If it 'takes a village' to raise a child, then putting an opera on its feet surely takes a small country!"

The opera, which is a part of the 2011-2012 University Series, is a joint presentation of the SFA College of Fine Arts, School of Music and School of Theatre.

Prior to the April 19 performance, Dalton will give an informative talk at 7 p.m. in Griffith Gallery, directly across the hall from Turner Auditorium. The audience is invited back to the gallery after the performance for a reception honoring the event's corporate sponsor, Point A Media, and to meet the cast.