SFA's Mainstage Series to feature 'The Madwoman of Chaillot' 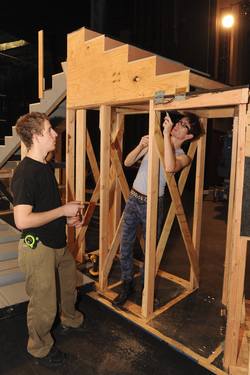 SFA theatre students Michael Spencer, right, Colleyville sophomore, and Trevor Moore, Richardson junior, build sets for the SFA School of Theatre's production of "The Madwoman of Chaillot." The Mainstage Series performances will be at 7:30 p.m. Tuesday through Saturday, Nov. 13 through 17, in W.M. Turner Auditorium in Griffith Fine Arts Building on the SFA campus.

NACOGDOCHES, TEXAS - The charming tale of a group of eccentrics who attempt to save 1940s Nazi-occupied France from the corruption of corporate executives and big-government politicos will take the stage when Stephen F. Austin State University College of Fine Arts and School of Theatre present "The Madwoman of Chaillot," written by Jean Giraudoux and adapted by Maurice Valency, at 7:30 p.m. Tuesday through Saturday, Nov. 13 through 17, in W.M Turner Auditorium.

The play, part of the School of Theatre's Mainstage Series, is one Rick Jones, professor of theatre at SFA, has wanted to direct since he read it in a college French class more than 35 years ago.

In "The Madwoman of Chaillot," a motley band of "vagabonds" - the titular "Madwoman" and her friends - attempt to thwart a plot by greedy industrialists and insensitive bureaucrats to turn Paris into an oil field, according to Jones. Although the play was written 70 years ago, "it's even more relevant today than it was when it was written," Jones said.

"The play was written in occupied Paris in the early 1940s," Jones said, "so the villains of the piece are - or at least were, in the French original - readily identifiable as Nazis and collaborators.

"What I find really interesting is that, for the first time I can remember, there are competing populist movements in this country right now: the Tea Party on the right and the Occupy movement on the left," he said. "What these folks agree on is that the little guy is getting shafted; what they don't agree on is who's doing the shafting.

"And whereas many of the 'bad guys' in this play are corporate types, both government and the media - favorite targets of the right - also get skewered pretty well," he said.

Jones said he finds working with the big cast - about 40 roles played by 28 actors - and a relatively short rehearsal time to be among the production's greatest challenges. But there are many rewards, also.

"This is a very mixed cast," he said, "ranging from a professional actor to some of our best upperclassmen to a lot of new faces."

Ten cast members are completely new to SFA's theatre program this semester, and several others are making their Mainstage debut.