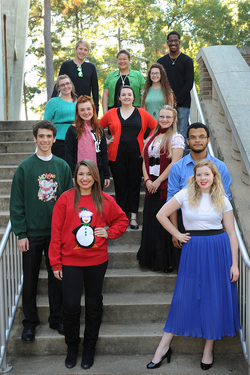 NACOGDOCHES, TEXAS - "Not Home for Christmas" will be presented by The (New) Original Cast, Stephen F. Austin State University School of Theatre's resident variety/comedy troupe, as a feature of this year's Nine Flags Festival.

The original play - a comedy featuring nine musical numbers - tells the story of three groups stranded in a mountain ski resort after an avalanche.

"It highlights the ways in which small miracles can happen, even when Christmas doesn't happen according to plan," said Jason Davids Scott, assistant professor of theatre at SFA and the troupe's director.

After the avalanche changes everyone's plans for Christmas, the characters, who are only remotely connected through shared acquaintances, begin to pull together, "and you see the trials they all go through that bring them closer together," cast member Pinelli said.

Pinelli, a sophomore theatre major from The Woodlands, finds the creativity allowed each cast member in developing their characters and the story line of the script to be one of the more rewarding aspects of his involvement in The (New) Original Cast. After cast members exchanged ideas about where the storyline would take this particular production, Scott wrote the script.

"I really enjoy the fact that you get to be 100-percent creative," Pinelli said. "We all created the characters and the script from scratch. We had our own ideas, and Dr. Scott put them into words.

"What people will see is a collaboration of the minds of everyone in the cast," he said.