SFA's Orchestra of the Pines to open 'A Season of Firsts' 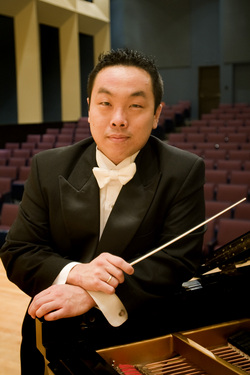 Gene Moon is director of orchestral studies for the SFA School of Music and director of the Orchestra of the Pines, which will open "A Season of Firsts" at 7:30 p.m. Monday, Oct. 8, in Cole Concert Hall.

NACOGDOCHES, TEXAS - The Orchestra of the Pines, Stephen F. Austin State University's flagship orchestral ensemble, will open its season - "A Season of Firsts" - with a concert featuring works from three countries at 7:30 p.m. Monday, Oct. 8, in Cole Concert Hall.

"International Delights," which is the title of the opening concert, will highlight works of composers that have become staple repertoire in the orchestra literature, according to Gene Moon, director of orchestral studies at SFA and the orchestra's director.

"To inaugurate 'A Season of Firsts,' I felt a collaborative effort was in order," Moon said.

Moon and David Howard, associate director of choral activities and director of the SFA Choral Union, attended the University of Central Oklahoma in Edmond, Okla., together. The collaboration will be their first and thus a fitting start to the "Season of Firsts," Moon said.

Howard, whose voice "is a beautiful instrument," Moon said, was an ideal choice as soloist for Williams' work. The role of the piano in Beethoven's Choral Fantasy is the centerpiece of the work. For this special engagement, Moon turned to Andrew Parr, SFA professor of music. The Oct. 8 performance will be Parr's second performance of the work.

"The last time the work was performed by the Orchestra of the Pines was on May 8, 1999," Moon said.

Howard will also perform as part of a sextet that will include Richard Berry, Scott LaGraff, Debbie Berry and Charlotte Davis, all SFA music faculty members, and LaGraff's wife, Kim LaGraff, who is an accomplished mezzo-soprano.

"The evening will be host to wonderful musicians on stage and be a night to remember," Moon said.

The Russian Easter Overture by Rimsky-Korsakov is a famous work in composers' oeuvre, according to Moon. Unlike many overtures that serve as opening numbers to operas and larger settings, Rimsky-Korsakov's work is a concert overture, a work meant to stand alone in performance, he said. The upcoming concert is the orchestra's first performance of the work in its history.

Williams' Five Mystical Songs is a collection of songs based on the work of English poet George Herbert. Of the five songs, the final movement, "Let All The World in Every Corner Sing," is one of the most well-known works presented as a liturgical song in many church settings.

Moon described Choral Fantasy as "perhaps the little brother" of Beethoven's famous ninth symphony, "related by the use of similar melodic material that popularized the larger sibling work," he said.

The concert is a joint presentation of the SFA College of Fine Arts, School of Music and Orchestra Series. It is sponsored in part by Nacogdoches Memorial Hospital, the Wedgeworth-Wright Endowment for the Arts and the Cole Annuity Fund.