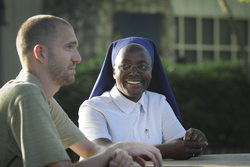 Cloistered in a typical classroom at SFA, half a world away from the southwestern coast of Lake Victoria in Tanzania, East Africa, where the Haya language is spoken, 15 linguistics students peppered their extraordinary field research informant with questions.

With uncommon patience and endurance, the informant dutifully responded to each inquiry, repeating words and phrases in her native tongue dozens of times if needed for the students' comprehension. The unfamiliar tones, inflections, vocabulary and grammatical rules that make up the complex Niger-Congo language were neatly recorded in the field notes of the students, who spent time outside of class listening to recordings of these sessions, sometimes for hours on end.

This painstaking process was repeated class after class, week after week, throughout the spring 2012 semester in a rare field research course for undergraduate linguistics students led by Dr. Christopher Sams, SFA assistant professor of linguistics and director of English education.

When it was all said and done, the students had contributed to the broader understanding of one of the world's critically under-documented languages. What's more, they had gained an appreciation for how field research can uncover unexpected common ground shared by two far-flung cultures, even when they are brought together purely by happenstance.

Almost a year ago, Sams was accepted into a program to implement the university's Quality Enhancement Plan emphasizing High Impact Practices at the undergraduate level. Such practices have been shown to improve higher-order thinking skills, cultivate deep learning, and lead to academic success and a better-prepared workforce.

He began thinking about how he might structure a new class that would fit with the goals of the QEP and eventually settled on a field methods course for undergraduate linguistics students - something of an anomaly in itself.

"Field methods is an upper-level master's or Ph.D.-level class in most linguistics programs, so undergraduates don't typically get to do this sort of thing," he said. "But I knew I had some enthusiastic students in our program who would be up to the challenge."

Sams was thrilled to receive a $1,000 implementation grant for the course through SFA's Office of High Impact Practices. And he immediately began putting out feelers for a current SFA student who would be willing to serve as the class' field research informant in exchange for a modest stipend. He contacted the SFA Office of International Programs and was soon connected with someone who, to a linguistics researcher, must have seemed like a winning lottery ticket.

Sister Josephina Mwoleka is a petite and unassuming Catholic nun who grew up in the village of Ruhole-Bulamula in the Kagera region of Tanzania. Besides her native language of Haya, she also speaks Rwandan, Swahili and English.

"I was very surprised when Chris first told me about this opportunity to help his students," said Mwoleka, who is in her second year as a graduate student in the SFA School of Social Work. "But I was very happy to get the chance to learn more about how languages are studied. I thought it was also a time to share something about my culture with others."

Having already earned a master's degree in psychology from the University of Minnesota, Mwoleka came to SFA specifically to pursue a Master of Social Work. Upon graduating, she will return to Tanzania where she hopes her education will benefit the Santa Maria Gorati Orphanage Center where she has long worked as a missionary.

The center serves more than 5,000 of Tanzania's most vulnerable citizens, mostly women, children and orphans whose lives have been affected by HIV and AIDS. At the mission, they are provided basic education, food, shelter and health care and are taught the skills needed for future self-reliance.

On a recent return visit to the mission, Mwoleka shared information with her colleagues about the research project she had participated in back at SFA. Curious about every detail of American culture, her community members were both flattered and mystified to learn of the research SFA students were conducting regarding their native tongue.

Immediately upon learning who the source for their research would be, Sams' students were presented with their first challenge of the semester - choosing which of Mwoleka's languages they wanted to study.

The safe choice was Swahili, a well-documented language that would allow them to conduct field research into an unfamiliar tongue but enjoy the benefit of the many volumes of academic literature already holding answers to research questions they might pose. The alternative was a much rarer opportunity to study Haya, a severely under-documented tonal language about which the number of previous publications can be counted on one hand. And most of those were written decades ago.

The Haya language is spoken by about 825,000 people in Tanzania, too many for it to be technically considered endangered, so it has received little attention from scholars over the years, Sams explained. But the dearth of documentation of the language in the form of grammar texts, dictionaries and scholarly works meant that whatever his students were able to glean from their research would likely contribute to the body of knowledge available to future researchers.

In the end, one student admitted, it really wasn't much of a choice at all.

"I think this is common of a lot of linguistics students, but we wanted to do something out of our comfort zone," said Lindsey Antonini, who participated in the class and graduated in May. "We were nervous and had serious doubts about whether we would be successful. But, in the end, we decided we'd rather work with Haya and do something to help the linguistics community instead of doing Swahili, which would really only be helping ourselves. We wanted to see what we were capable of."

Mwoleka began joining the 8 a.m. class each Tuesday and Thursday. With the students' chairs arranged in a semi-circle around their distinguished informant, the fledgling researchers, tentatively at first, took turns asking Mwoleka to sound out vocabulary words in her native Haya. Often, the students would ask her to repeat a word more slowly, use it in a sentence, vary the tense - or all of these - until they were satisfied and ready to move on.

Using the International Phonetic Alphabet, the students carefully recorded the vocabulary words and grammatical structures of the language in their field notes, becoming more comfortable with their informant and the language with each passing week.

"The students were very cooperative and eager to learn," Mwoleka said. "This language is not theirs, so sometimes I needed to repeat things to help them understand. I didn't mind. I was glad to do it."

By the end of the semester, the students had compiled a list of about 150 words that are not included in the only known Haya dictionary, a small, rudimentary volume that provides English translations for a limited number of Haya words. Sams has since been in contact with the dictionary's editor, who has enthusiastically agreed to include the SFA students' findings in the next printing.

"To me, that was the most exciting part of all - that we were able to blaze a trail for other researchers," said Justin Stoker, a senior English major from Wylie who is minoring in linguistics.

"We weren't just simulating research in a field methods class. We were actually doing the research, applying what we have learned in a way that can benefit the overall field," he said. "For those of us who are planning to go on to graduate school and pursue a career in linguistics, this was an amazing opportunity to learn research methods and make a real contribution at the same time."

Participation in the field methods class already has benefited Antonini, who was accepted into the prestigious Ph.D. program in linguistics at the University of Georgia immediately upon receiving her bachelor's degree from SFA. She credits the field methods course for helping her stand out among the other applicants, although she ultimately decided to pursue a master's degree in linguistics before embarking on a doctoral program.

"I think a class like this really gives the students at SFA an advantage over similar programs, because no one has taken a risk quite like this. But, I feel like our risk really paid off," said Antonini, a native of Baytown. "We can take our experiences from this class with us to graduate school and into the work force, and not many undergrads can do that. That's a big deal."

For their final class project, Sams' students were asked to translate from Haya to English a popular fable that Mwoleka learned as a child and has retold to countless children at the mission. It is a cautionary tale of a small child who ventures into the wilderness alone to gather wood and is captured by a hungry cheetah. The cheetah is eventually outwitted by the village's elders, and the boy is safely reunited with his family.

At Mwoleka's request, each of the students also shared a short story from their childhood with her. The stories topped off a discussion of similarities and differences between the two cultures that had paralleled the students' linguistics research throughout the entire semester.

Both the students and their research informant reported that this increased understanding of one another's culture - as well as a new perspective of their own - was among the most rewarding aspects of the experience.

"You never think you are going to sign up for a class that will actually alter a field - even in a seemingly small way, like adding words to a dictionary," Antonini said.

"But, by the end of the semester, I think we wanted even more to give back to Sister Josephina for everything she did for us. She was amazing. And I hope that, by helping document the language of her people, we have reciprocated her kindness in some small way."