Trio Solari to perform at SFA 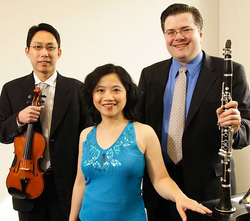 The trio, composed of clarinetist Chad Burrow, violinist Sean Wang and pianist Amy Cheng, will perform Paul Schoenfield's "Trio." Barrett Sills, principal cellist for the Houston Ballet Orchestra and the Houston Grand Opera Orchestra, will then join the group in performing Olivier Messiaen's "Quartet for the End of Time."

Both of these 20th-century compositions are "among the best chamber works written for the relatively uncommon combination of clarinet, string instruments and piano," said Wang.

Schoenfield's four-movement work, which combines music appropriate for both Hassidic gatherings and chamber music concerts, employs the clarinet, violin and piano. It was written in 1990.

Messiaen wrote his piece while interred in a German prisoner-of-war camp along with three professional musicians. The quartet (with Messiaen playing piano) was premiered at the prison camp on Jan. 15, 1941.

The recital is a joint presentation of the SFA College of Fine Arts and School of Music and is part of the Cole Performing Arts Series. Cole Concert Hall is located in the Wright Music Building, 2210 Alumni Drive.