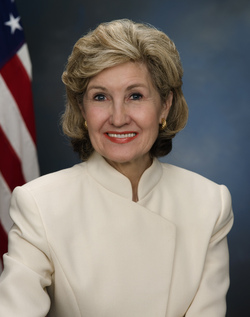 Hutchison has served as senator since 1993, and she remains the only woman to represent the state of Texas in the U.S. Senate. Her current term expires in January, and she did not seek re-election.

Recently, Hutchison announced her decision to donate to SFA some of the artifacts representing her time in the Senate. The artifacts, which include service awards, photographs taken with world leaders and other items of historical interest, will be displayed in the Senator Kay Bailey Hutchison Room located on the second floor of the Ralph W. Steen Library. The public is invited to attend the grand opening and reception at 4 p.m. Friday, Dec. 14.

"We are extremely pleased to have been given the opportunity to help preserve Senator Hutchison's proud legacy of service to our university, our community, our state and our nation by caring for and displaying her historical artifacts in Steen Library," said SFA President Dr. Baker Pattillo.

"During Senator Hutchison's tenure in the Senate, SFA has received federal funding to support important ongoing research in many areas, including education, forestry and agriculture," he said. "She has been one of SFA's strongest proponents in Washington, and the university is eternally grateful for her strong support and friendship throughout the years."

The room's design and furnishings will replicate as closely as possible the office Hutchison occupied in Washington, D.C. Display cases will hold many of the donated artifacts, which include a Houston Oilers football jersey bearing Hutchison's name, a large-scale model of Space Shuttle Discovery, keys to many Texas cities and an 1853 Mitchell's Universal Atlas once owned by Texas hero Thomas J. Rusk.

Rusk was the first Texan to hold the U.S. Senate seat Hutchison currently occupies. He and Hutchison's great-great-grandfather, Charles S. Taylor, were friends, and both signed the Texas Declaration of Independence.

Hutchison is a member of the Republican National Hispanic Assembly National Advisory Committee. In 2012, she was unanimously elected chairman of the Board of Visitors at the U.S. Military Academy at West Point. She previously served as chairman of the board from 1998 to 2000 and from 2008 to 2009 before being re-elected to serve again this year.

Hutchison grew up in La Marque and graduated from the University of Texas and UT Law School. She was twice elected to the Texas House of Representatives and, in 1990, was elected Texas state treasurer. In June 2000, she and several colleagues co-authored "Nine and Counting: The Women of the Senate," and in 2004, she released her first book, "American Heroines: The Spirited Women Who Shaped Our Country." Hutchison published her most recent bestseller, "Leading Ladies: American Trailblazers," in October 2007.

Hutchison lives in Dallas with her husband, Ray, and their two children, Bailey and Houston.