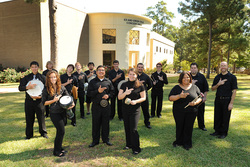 The annual fall concert of the SFA Percussion Ensemble is scheduled for 7:30 p.m. Tuesday, Nov. 6, in Cole Concert Hall as part of the SFA School of Music's Concert Series.

The 14-member ensemble is comprised of graduate and undergraduate music majors and is directed by Brad Meyer, SFA interim director of percussion studies.

"The concert is sure to appeal to any type of listener," Meyer said. "Compositions will range from bombastic and raucous drum music to light and delicate keyboard pieces."

Scott Harris, interim director of the SFA School of Music, will guest conduct Christopher Deane's "The Manes Scroll," which utilizes melodic percussion instruments, such as marimba, vibraphone and crotales, and is "a sonic masterpiece with varying layers of depth and intensity," Meyer said.

"Also, the percussion ensemble will be performing Deane's contemporary and powerful piece 'Parallel Isometry,' which utilizes intense blocks of sound created by both drum and keyboard instruments," Meyer said. "Lastly, Brett William Dietz's 'Fanfare for the Return of Shadow' clashes eight percussionists playing drums and cymbals against each other in a multi-meter brawl for sonic dominance."

The Percussion Ensemble's performance is part of the SFA College of Fine Arts and School of Music's Concert Series. Tickets are $5 for adults, $4 for seniors and $2 for students. For tickets or information, visit www.finearts.sfasu.edu or call (936) 468-6407.