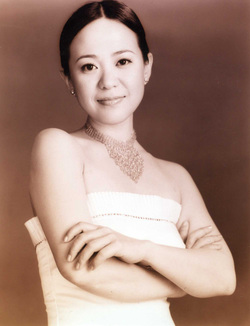 Wu will perform as a solo artist and with the ensemble in presenting Eckhard Kopetzki's "Night of Moon Dances," a percussion quartet with marimba soloist that was an obligatory piece for the 2004 Belgium International Marimba Competition.

"I have known She-e for over 10 years and have continuously been amazed by her musicality, grace and sensitivity, and flawless technique," said Scott Harris, SFA professor of percussion and the group's director.

"She is one of the premiere marimbists and percussionists in the world today. It will be a true pleasure to have her on campus for the concert as well as for clinics and master classes with our students," Harris continued.

During the concert, the 13-member group will also perform two large ensemble works by Rob Smith and David Gillingham.

"Smith's 'Surge' is a highly syncopated and energetic work that constantly gathers momentum until the climactic ending," Harris said.

"Gillingham's 'Stained Glass,' which is inspired by the beauty and color of stained glass typically found in churches and cathedrals, conveys the reverence, mystery and joy that emulates from stained glass catching sunlight at just the right time of day." It will be conducted by graduate student Michael Oreka of Chesapeake, Va.

The ensemble will also play Chris Crockarell's "Brooms Hilda," which Harris describes as "a choreographed (STOMP-like) work using only push brooms as instruments."

The concert is a joint presentation of the SFA College of Fine Arts and School of Music and is a part of the Cole Performing Arts Series. Cole Concert Hall is located in the Wright Music Building, 2210 Alumni Drive.