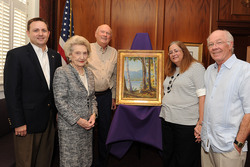 A painting by Stephen F. Austin State University benefactor Frank S. Aikman recently was donated to the institution by the daughter of one of Aikman's friends, the late Kenneth Kennedy. Pictured with the painting, from left, are Trey Turner, SFA major gift officer; Peggy Wright, former SFA regent and longtime SFA supporter; Campbell Cox, a friend of the Kennedy family; donor Susan Kennedy; and her husband, Sean Walters.

NACOGDOCHES, Texas - A painting by Stephen F. Austin State University benefactor Frank S. Aikman recently was donated to the institution by the daughter of one of Aikman's friends, the late Kenneth Kennedy, an SFA alumnus and retired U.S. Army brigadier general.

Susan Kennedy, who made the gift to SFA in late June, said the artwork is one of three paintings by Aikman that have been in her family for as long as she can remember. She knew Aikman as "Uncle Frank" and said the paintings traveled the world with her parents, who counted them among their prized possessions.

Both of her parents were graduates of SFA, along with her uncle, Dr. Joseph Kennedy. One of the university's most famous alumni, Joseph Kennedy co-discovered the element plutonium. SFA's Kennedy Auditorium is named in his honor.

"I have a lot of family ties to SFA, and this is the place where my parents met, so I am thrilled that the painting will now belong to the university where it will be respected and cared for just as they would if they were still here," Kennedy, a Houston accountant, said during the presentation.

"I grew up hearing stories about Uncle Frank and his importance to SFA, and so it is very meaningful to me to be able to bring the painting back home, so to speak."

Kennedy said she was encouraged to donate the painting to SFA by another family friend, Peggy Wright, former SFA regent and longtime supporter of the university. The painting depicts a tree-lined waterfront with mountains and fall foliage in the background.

Trey Turner, SFA major gift officer, said it has not yet been determined where the painting will be hung, but it will be displayed in a place of honor at the university.

"Frank Aikman has strong historical ties to our institution, and so we are very grateful that Ms. Kennedy brought this painting to us," Turner said. "We have assured her that it will be very well taken care of at SFA."

Aikman was born in 1862, and, in 1913, he purchased controlling interest in a popular hair tonic called Mahdeen. Considered SFA's first great benefactor, Aikman donated $12,000 in 1924 for the college's gymnasium, which was later named for him. The gymnasium no longer exists, but the street that runs behind the Austin Building still carries the Aikman name.

While on campus recently, Kennedy also donated two pieces of her father's memorabilia to the East Texas Research Center at Steen Library, including a folder of SFA class notes dated 1937 and a journal he later kept at West Point in which he wrote considerably about his time in Nacogdoches.