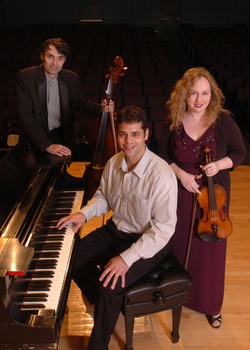 SFA's Alazan Trio will perform "Women of the World," a concert that showcases piano trios written by women composers, at 7:30 p.m. Thursday, Sept. 5, in Cole Concert Hall on the campus of Stephen F. Austin State University.

NACOGDOCHES, TEXAS - The Stephen F. Austin State University School of Music and the Cole Performing Arts Series will present The Alazan Trio performing "Women of the World" at 7:30 p.m. Thursday, Sept. 5, in Cole Concert Hall in the Wright Music Building on the SFA campus.

According to Petti, the selected trio by Beach, the late American composer and virtuoso pianist, is "very reminiscent of French composer and pianist Claude Debussy," while the trio by the English composer Clarke is "consistently fascinating in its interrelated themes across the movements, including a spectral fanfare which appears in the first movement and ecstatically in the piano cadenza in the finale."

"A Feather of Blue," written by Grenfell, coordinator of composition at The University of Tasmania, Australia, who was resident composer at SFA during the 2013 spring semester, is also among the piano trios to be performed. Commissioned in 2000 by the New Zealand Trio, "A Feather of Blue" takes its title from a phrase in the poem "A View From A Window" by New Zealand writer Kevin Ireland, according to Grenfell.

"I have always admired the wry humor and brightness of Kevin Ireland's writing and many years ago set three of his poems for soprano and mixed ensemble," Grenfell said. "As a kind gesture, Mr. Ireland sent me a copy of his book of poems, 'Skinning A Fish,' and I was particularly struck by the imagery of colors, flowers, feathers and birds in this poem, which illustrates rain pouring down a window pane and giving way to a burst of sunshine after a storm."

"I have always been fascinated with the connection between painting and music," she said. "In my composing, I often picture colors as if I were spreading them on a canvas, except I do so with melodies and harmonies and through the peculiar sounds of the instruments themselves."