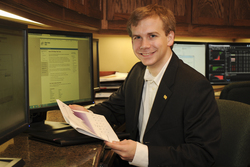 SFA business student Glen McMahon of Coppell recently earned a perfect score on the Major Field Test. Fewer than 10 of the 121,083 students who have taken the test nationwide answered every question correctly.

NACOGDOCHES, Texas - Imagine a classroom filled with 121,083 college seniors taking a required graduation test. The students represent 654 institutions from across the United States, and each student has a two-hour time limit to complete the 120-question exam.

A little more than an hour into taking the test, a Stephen F. Austin State University student completes it and receives his grade - all answers correct, a perfect score.

The test, used to measure students' critical knowledge and understanding in a major field of study, was first administered to U.S. business college students in 1990. It was revised in 2010, and since that time, 121,083 students nationwide have taken the exam with only eight achieving a perfect score.

At SFA, the test has been required since 2007 and is generally administered to seniors in the Nelson Rusche College of Business the semester before graduation when they are enrolled in Management 463 - Business Policy and Strategy, the capstone course required for all B.B.A. students. McMahon's achievement is a first-ever for SFA.

"The exam is given online," McMahon said. "When you complete it, the computer instantly generates your score. Dr. Ryan Phelps, SFA assistant professor of economics, proctored the test. I was the first student to complete the exam. When he saw my score, he said, 'I've never seen this happen.'"

McMahon, a triple major from Coppell, will complete his Master of Professional Accountancy in May 2014. He also will graduate with bachelor's degrees in economics and in finance.

"My mom encouraged me to visit SFA and apply for admission," McMahon said. "She graduated from SFA in 1982 with a bachelor's degree in computer science. We visited the campus twice, and I really liked the trees. The friendliness of the faculty members and staff also impressed me," he said.

Initially, McMahon planned on majoring in economics. About one year into his studies, he decided to add finance as a second major. "I had some extra time to fill, so, I decided adding a second major would put it to the best possible use." About a year later, he added accounting, as well.

"I have a natural aptitude for working with numbers. Subjects that involve analytical problem solving are what I most enjoy. All my major areas of study are somewhat interrelated, and many of the courses cross over from one discipline to another."

McMahon said the Major Field Test is based on subject matter students learn in the course of their studies; therefore, it is difficult to know what to study. It measures knowledge retention, and the questions address the most common and important topics and skills. He said in order to do well, students must prove they have mastered the concepts, theories and analytical methods from several disciplines.

Dr. Elton Scifres, SFA professor of management, teaches the capstone course during which students take the MFT. "The test allows us to see how our students are doing compared to students at similar institutions across the nation," Scifres said. "The results can give us an idea of our program's strengths and weaknesses and can theoretically lead to curriculum and/or course changes, if needed."

Scifres added that during his 20 years of teaching, McMahon is one of the brightest students he's seen. "Glen is working toward three majors in very demanding subjects. I'm not aware of any student in my classes ever doing this."

McMahon also has been involved with the Mast Student Investment Roundtable, a class in which SFA students manage a real-world equity portfolio. In April, McMahon traveled to the University of Dayton to attend the Redefining Investment Strategy Education conference, the longest-running student investment conference in the world.

There, a contest pits student portfolio managers against each other with the goal of honoring the year's best-performing student-managed funds in six categories: alternative, balanced, core, fixed, growth and value. While there, McMahon accepted SFA's second-place award in growth.

"The Mast Student Investment Roundtable is comprised of about a dozen of SFA's best finance students," said Dr. Todd Brown, SFA associate professor of finance and chair of the Department of Economics and Finance. "Each student analyzes and researches his or her specific sector. It's very time intensive, and the research is critical in deciding which stocks we will purchase and add to the portfolio. Glen not only conducted his research, but also assisted the other students with analyzing theirs."

When he's not in class, studying or acing tests, McMahon works as a graduate assistant for the finance department in the Nelson Rusche College of Business. He is a member of Beta Alpha Psi, the accounting honorary society; the Finance Club; and Beta Gamma Sigma, the internationally affiliated business honor society.

McMahon said after graduation he would like to work for an accounting firm and sit for the Certified Public Accountant exam. He says the exam will require him to do something he didn't have to do for the MFT: study. "I'll need to spend several months preparing for that one."