From his home studio in Round Rock, Texas, 2002 SFA graduate Todd Slater designs stunning silkscreen concert posters for some of the biggest names in the music industry.

Slater's modern works of art have represented a who's who of rock 'n' roll, from legendary songwriters Bob Dylan and Neil Young to alt rockers Edward Sharpe and the Magnetics Zeros. Through the use of silkscreen printing, vivid colors in each of his pieces come to life, while metallic inks and holographic papers provide textural depth.

Initially drawn to Andy Warhol and Ed Ruscha paintings in museums, Slater's powerful and intricate imagery has music managers seeking out his creative talents to portray their bands' images. Many of his works feature psychedelic images, elements inspired by nature and clever typography to form ornate shapes.

For inspiration, Slater may listen to the band's music or follow a gut instinct while brainstorming. "One of my professors at SFA, Robert Kinsell, preached the importance of not making art according to any sort of formula, and that's always stuck with me."

Slater earned an art degree from SFA with an emphasis in advertising and design, along with minors in both painting and cinematography. Although he never took a printmaking course in school, Slater was immersed in the art of screen-printing while completing an internship at a local T-shirt and graphic design shop in Nacogdoches. "I did an internship at Tattoo (Productions) while I was still in school, and that real-world experience turned out to be invaluable."

When first breaking into the gig poster industry, Slater would tenaciously contact band managers for a shot at designing a poster for tours. "I kinda feel like I was faking it until I made it with the bands early on," Slater said. "I always pretended to know what I was doing, and eventually the jobs started coming in more regularly."

Although he's sold prints at venues the night of a show, he says he's stayed away from meeting the bands for the most part. "There came a point where I had to graduate from fan boy to professional. I may still geek-out about a bigger project, but it's done through silently high-fiving my wife and fist pumping at my desk."

However, one of his most prominent clients, Jack White of The White Stripes, is highly involved in the design process. "Jack White is very hands on and has a lot of thoughts on imagery," Slater said. "He's someone I feel people will be listening to in 10, 20, 30 years and beyond, and I feel lucky to be associated with his work."

As Slater continues to make a name for himself in the poster art industry, he remembers the passion of SFA faculty members who influenced him.

"I have to say that the art department at SFA is amazing, and here's why: all of the professors are accomplished artists in their own right," Slater said. "I learned a lot from Robert Kinsell, Peter Andrew, William Arscott, Gary Parker and Gary Frields. If I arrived early for class, I'd sneak in the back of Dr. (David) Lewis' art history lectures, which is a testament to his passion, I think. The course he taught on art history spanning from 1940 to present was particularly important to me."

Aside from the music business, Slater has ventured into poster design for movies, T.V. series and pop-culture icons. Gallery 1988 in Los Angeles admired his gig poster work and commissioned prints for such movies as The Big Lebowski and Back to the Future 2, while Alamo Drafthouse's Mondo Gallery has sought out Slater's artwork for classics like Lord of the Rings and Star Wars. His works recently made their way to Nacogdoches, as The Cole Art Center @ The Old Opera House displayed a collection the SFA graduate's posters in the "The Art of Rock" exhibit last fall. 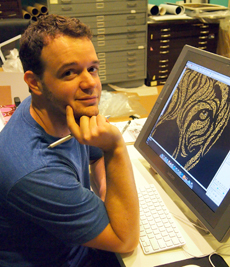 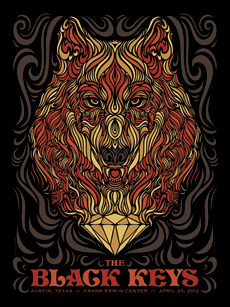 This concert poster for the alternative rock band The Black Keys is one of many designed by 2002 SFA graduate Todd Slater. Photo courtesy of Todd Slater.