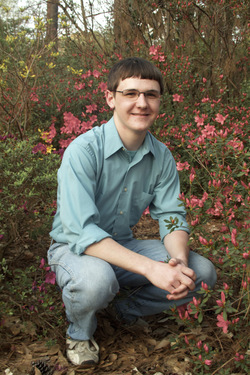 NACOGDOCHES, TEXAS - "An Evening Storm," a musical composition by 16-year-old Timothy Dow of Huntington, a student in the Stephen F. Austin State University's Music Preparatory Division, will be premiered by the Austin Symphony Orchestra in a special concert at 7:30 p.m. Wednesday, April 3, in Dell Hall in the Long Center for the Performing Arts, Austin.

Dow's composition is one of 10 new orchestral works written by Texas students age 18 and younger to be premiered in the third annual Texas Young Composers Concert.

Dow, who is homeschooled, plays violin, viola, bass, cello and piano and is a member of the Piney Woods Youth Orchestra, an ensemble formed through the Music Preparatory Division and directed by Evgeni Raychev, and the Orchestra of the Pines. He also recently won 1st chair cello in the Region 4-21 Orchestra, a position he has held for three years.

"Timothy is not only a very talented cellist, but also a very gifted composer, as well," Raychev said. "I certainly am very proud of Timothy, and I know that my feelings are shared by all who know him."

"I was writing the melody to this piece when I got the idea of it being about a storm," Dow said in describing the composition. "I was working on the beginnings of it when I heard thunder outside in the distance. I thought that the melody sounded good in that setting, so I continued writing it with a storm in mind."

Dow has studied composition on his own through experimentation and score studies. His 2012 piece, "The Locomotive," won honorable mention at the Merle J. Isaac Competition Contest.

Dow, who is the son of Diana and Danny Dow of Huntington, started playing piano at 5, violin at 7 and cello at 10, according to his mother, Diana, who was his piano teacher. He wrote his first piece as a solo piano piece when he was 7. In addition, he has built his own violin, is working on making his own cello, and plays the fiddle in a country band.

Dow uses the software Finale for his composing.

"Timothy teaches himself to compose much the same way Benjamin Franklin taught himself to write," Diana Dow said. "He listens to the music, he studies the score, and then he applies some new thing he learned from that composer to his next piece. He spends a lot of time playing with new ideas on the piano, and then he'll spend a lot of time on the computer elaborating on what he was playing on the piano."

The compositions to be performed were chosen from more than 25 entries to the Austin Symphony's annual Young Composters Competition held last fall.

"This competition and concert series is a new initiative of the ASO," said ASO Education Director Diana Eblen.

"This concert will premiere the Top 10 entries and is a wonderful addition to the ASO education programs. It is difficult for young composers to have their composition played by a professional orchestra. It is our hope that the ASO's Young Composers Competition and Texas Young Composers Concert will continue to encourage young Texas composers and nurture future masterpieces."

In January, Dow attended a rehearsal of the Austin Symphony during which time Dow's winning composition was rehearsed.

"To have my piece played on a stage by a professional orchestra is so exciting," Dow said. "It is something that very few people get to do, and to hear each musician play every note that I wrote is very cool. I was blown away by the massive sound that the orchestra has."

For more information about the concert, visit www.austinsymphony.org.