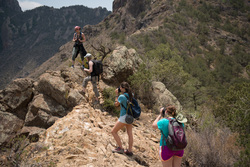 NACOGDOCHES, TEXAS - Breathtaking desert landscapes with rugged rock formations contrasting against vivid blue skies and sunlit golden sand have been favorite subjects for artists of all mediums for generations.

For the past three years, photography students in the Stephen F. Austin State University School of Art have taken a trip to the West Texas/New Mexico area during the Maymester session between the end of the spring semester and the beginning of the first summer session.

The idea, in part, is to "get out of Nacogdoches," School of Art Director Christopher Talbot says with a laugh. "We want to open the students to the possibility of traveling to other places" to pursue their artistic endeavors.

"I think that's one of the main goals … to open their minds to the possibility of going to other places and seeing other things that can't be seen here in East Texas," Talbot said.

Spending even a short period of time in a landscape that is still in Texas yet so different than what surrounds the students in East Texas also helps them to "see their own backyard differently," he added.

Photographing sunsets in Santa Elena Canyon and wading across the Rio Grande between the Texas and Mexico borders are among the trip highlights that truly broadened the students' view of the possibilities of where and how their desire to pursue a career in photography can take them.

Time is spent during the trip talking about landscape photography and encouraging the students to think about their own approach to the landscape, Talbot said, including how they might photographically respond to the changing formations, and to look for a theme on which they might like to focus.

This year's Maymester trip to Big Bend was the School of Art's second trip to the area; last year was spent in Santa Fe, N.M. Although the session is just under three weeks, the intense Maymester study equals a full three-hour-credit course for students, 12 of whom participated this year. One week was spent in the field, while the rest of the session was spent back in campus classrooms processing and printing the images taken in West Texas and getting ready for the final critique.

In SFA vans, Talbot and Neal Cox, professor of printmaking and photography, took the students to Big Bend National Park where the group camped at Cottonwood Campground for a couple of nights before moving on to Davis Mountains State Park near Fort Davis. Students camped the entire week.

"For some students, it was their first time to camp," Talbot said. "And they all did well."

The dramatically beautiful Santa Elena Canyon was the first stop where students waded in the Rio Grande at the international border between the U.S. and Mexico.

"The river was very low at that point, so it was easy to walk across," Talbot said. "It was interesting; you don't get to 'hang out' on the border like that usually."

Literally thousands and thousands of photographs were collectively shot by members of the group, which led to the second phase of the educational opportunity presented by the trip, Talbot said.

"I shot 2,946 pictures while I was out there, so obviously you have to edit, and then you have to make something of that," he said. "That's really what we focus on in the week once we get home. At that point you can't go back out and shoot more photos. You have to work with what you've got."

This process also helps the students out in the field to begin mentally editing as they go along, he added.

"We're in a unique time in photography and technology where it really doesn't cost you anything to shoot a lot of pictures, if you are shooting digitally, although we had students shoot film as well," Talbot said. "We want to encourage students to shoot a lot, because you learn from that. You learn from mistakes as well as successes. And you try a lot of different things. But then there is the editing aspect where you have to make sense of all that once you get home."

At one point, the group stopped at Contrabando, an abandoned movie set with a ghost town feel, in Big Bend Ranch State Park where students took photos of the old adobe buildings right next to the Rio Grande.

Last summer in Santa Fe, the students on that trip worked with Bostick and Sullivan, a company that makes supplies for handcrafted photography including historic photographic processes.

"They taught us how to do tintypes, a Civil War-era process that produces an image without the use of a negative," Talbot explained.

On this trip, the students wanted a similar experience. To create it, windows in one of the buildings at Contrabando were covered in blankets and sleeping bags so as little light as possible could enter, transforming the adobe structure into a makeshift darkroom. The tintype plates - 4-by-5 inch metal plates that are sensitized and placed in a light-tight holder - were prepared, then exposed while still wet and then processed in chemicals and washed with water. The final rinsing of the plates was done in the Rio Grande.

"You have about a 10-minute period out there in that dry heat to do this process," Talbot said. "That was the whole reason we set up a darkroom there because it is a process that has to be done in the field."

On the final leg of the trip, students spent time at the Chinati Foundation in Marfa where artist Donald Judd has a permanent exhibition on display at an old military installation transformed into an exhibition gallery.

"They don't normally allow photographs, but since we were bringing photography students there, they let us photograph," Talbot said. "I think our art history professors would be upset if we were that close to Chinati and didn't take our students there. It's just something students need to see in person. You can look at photographs or a book on Donald Judd's work, but it is just not the same as visiting and seeing it in person."

Talbot hopes the Maymester destination can alternate between Big Bend and Santa Fe in the future.

View a slideshow of selected photos. 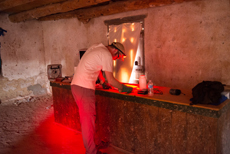