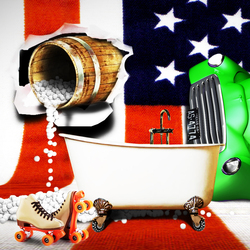 The artwork of Texas-born Robert Rauschenberg is the inspiration behind "bobrauschenbergamerica," a play written by Charles L. Mee. The SFA School of Theatre will present "bobrauschenbergamerica" at 7:30 p.m. Tuesday through Saturday, April 23 through 27, in W.M. Turner Auditorium on the SFA campus. Also opening Tuesday night is the art exhibition "Robert Rauschenberg: Four Decades of Work on Paper" in Griffith Fine Arts Gallery, which is located across the hall from Turner Auditorium.

"bobrauschenbergamerica" by Charles L. Mee doesn't have a traditional story, according to SFA Assistant Professor of Theatre Jason Davids Scott, the play's director. It's a series of scenes, monologues, musical numbers and other events that are inspired by the work of artist Robert Rauschenberg. A painter, sculptor, collage artist and theatre artist, Rauschenberg was "someone who defied easy labels and descriptions," Scott said.

"In a way, Robert Rauschenberg's work is about pieces of 'junk' - things that have been produced, consumed, discarded and then found again," Scott said in his director's notes. "So, too, is the work of Charles L. Mee, the playwright, who famously said, 'There is no such thing as an original play,' and who often borrows monologues, characters and scenes from one play and uses them in another.

"To me, the characters, the scenery, the music, the costumes, and all of the creative elements of this production of 'bobrauschenbergamerica' are basically pieces for our ensemble of artists and designers to play with and make sense of," he said. "Some of what we play with has to do with Rauschenberg's life, some of it has to do with our own lives, some of it is just stuff we found along the way."

There are a lot of unusual production elements - particularly props and sets, according to Scott, who describes faculty scenic designer Richard Ellis and student prop masters Tony DiBernardo and Eric Gibson as "in many ways, just as important as any of the cast and crew." Ellis, who is a visiting assistant professor, is also in charge of the large projections that will be suspended above the stage.

"I was very inspired by the lines in the play that talk about art as an act of freedom," DiBernardo said. "For each set piece, I first wrote down what I felt and then tried to take that design as far as I could based on that initial feeling. The idea was to just be inspired by Rauschenberg's style, not to copy it."

Combining movement-based theatre, choreography and elements of sound design into the performance is also something that Scott had never approached on this level. Laura Rikard, assistant professor of theatre, serves as movement coach for the production, and she is also in the cast. Juanita Finkenberg, School of Theatre adjunct faculty, is choreographer, while CC Conn, assistant professor of theatre, created the sound design.

"Ultimately, working without a traditional story is perhaps the biggest challenge," Scott said, "but I'm confident enough in the quality of the playwriting and the immense talent of the cast to know that the show will be a dazzling piece of entertainment."

Also opening tonight is "Robert Rauschenberg: Four Decades of Work on Paper," an exhibition of 18 of the artist's creations offering an insightful cross-section of Rauschenberg's long and varied career, according to John Handley, SFA galleries director, who describes Rauschenberg's prints as "so dense with cultural references that a single meaning is difficult to arrive at."

The exhibition opens at 6 p.m., followed by an informational talk at 7 p.m. about the play and exhibition presented by Handley and Scott.

"bobrauschenbergamerica" is a presentation of the SFA College of Fine Arts and School of Theatre. The play, sponsored in part by Tipton Ford Lincoln, runs nightly through Saturday, April 27, at 7:30 p.m. It is recommended for mature audiences. Tickets for this Mainstage Series production are $12 for adults and $6 for seniors and students. 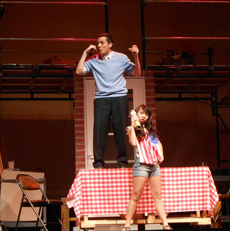 Senior theatre majors John Lisi and Mai Lê rehearse a scene from "bobrauschenbergamerica," the Stephen F. Austin State University School of Theatre production set to open at 7:30 p.m. Tuesday in W.M. Turner Auditorium on the SFA campus. The show, which is recommended for mature audiences, runs nightly through Saturday, April 27.