The Boldest Sound from the Oldest Town 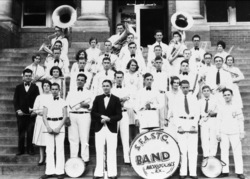 When Stephen F. Austin State Teachers College opened its doors in 1923, the emphasis was in establishing an instructional program that would produce qualified teachers.

In addition to the academic and elective courses offered at the new college, athletics also was immediately incorporated into campus life with students choosing the Lumberjack as the Stephen F. Austin mascot.

But something was missing in those early years. It was music. SFA needed a band.

IN THE FALL of 1925, The Pine Log published an article that told of the college purchasing new brass and percussion instruments for students who qualified for musical organizations, meaning a band and an orchestra. Some rehearsals had begun, and other students were encouraged to try out. The college band made its debut later that fall, and a search began to find a director.

J.T. Cox became the first director of the Lumberjack Band in the summer of 1926. With Cox accompanying the 14 members of the group, the band played at watermelon parties and for chapel exercises. When the fall semester began, the now 19-member band played at football games and area public school events.

The first Lumberjack Band uniform came together in February 1928 and consisted of a white sweater with a purple lyre on the front worn with white trousers and purple caps. That same semester, Cox allowed girls to join the group, and the members were no longer referred to as "the band boys." The following summer, Cox began a tradition of performing weekly outdoor concerts on campus where ice cream and cold drinks were served.

In the decade that followed, the band grew in numbers and continued touring East Texas cities. But the effects of World War II took a toll on the college, with enrollment declining along with band membership. During this time, Cox used what resources he had to form a small jazz band. By fall 1946, the band had grown to 60 members and began performing more difficult routines on the football field.

In 1952, Robert G. Smith, who had served as Cox's assistant, became the second Lumberjack Band director. Others who would follow included Jimmie M. Hudgins, Kenneth Green, Mel Montgomery, John L. Whitwell and Fred Allen, who took over as director in 1994 and continues to lead the program today.

Each director brought his own contributions to the program. During Hudgins' tenure, band camps, the Twirl-O-Jacks and the Kappa Kappa Psi and Tau Beta Sigma service organizations were added. Montgomery also changed the marching style of the band, eventually switching to a corps style, and started the "Concert in the Park," a tradition that continues today.

As SFA's director of bands for the past 19 years, Allen considers himself "the caretaker of something important to the university and its alumni."

"A former colleague once said, 'the band is the sound track to the game,'" he said. "Our presence at athletic events allows us to turn spirit into music. Dr. David Campo does an incredible job of this during football season in his role as director of the Lumberjack Marching Band, and Dr. Tamey Anglley (assistant director) does this as well with the basketball band. In addition, our concert bands, jazz bands and smaller student groups bring music to Nacogdoches and the surrounding area on a number of occasions throughout the year."

The SFA School of Music has doubled its student enrollment since Allen took over the band program in 1994, and today, under the leadership of Campo and Anglley, the LMB consistently marches at least 250 students.

Over the years, students have told the band directors how much fun it is to be a part of something that "has such a place of honor" on the campus, Allen said, noting that games feel "interactive," and band students feel like they can help fire up the team when needed.

"As ambassadors, the band students had a unique experience leading the 2013 London New Year's Day Parade," Allen said. "That was a once-in-a-lifetime experience, but our students give the same effort here in Nacogdoches - just one of many ways being in the Lumberjack Marching Band is a special thing."

The historical perspective for this article is based on a thesis written by Christopher M. Atkins in May 1998 for a Master of Arts in music education. 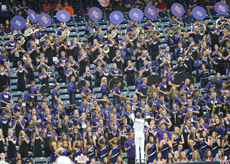