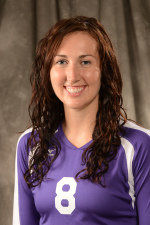 Sabrina Burns was named a recipient of the Southland Conference's F.L. McDonald Postgraduate Scholarship on Monday.

FRISCO, Texas - Senior middle blocker Sabrina Burns has been named a recipient of the Southland Conference's annual F.L. McDonald Postgraduate Scholarship announced league officials Monday afternoon. Burns' accomplishments will be honored during the Southland Honors Ceremony on May 21 at the Gaylord Texan Resort in Grapevine, Texas.

The McDonald Scholarship is the league's ultimate academic honor for its top graduates. The award is presented annually to graduating male and female letterwinners with the highest cumulative grade-point averages during their enrollment at Southland Conference universities. The $2,500 scholarship must be applied to graduate study at an institution of the recipient's choice.

Burns achieved a 4.00 GPA in professional accountancy and plans to continue her education at Rusche College of Business with a master's degree in accounting. The McAlester, Okla., native is a three-time CoSIDA academic all-district selection and was named to the third-team Academic All-America as a senior.

Burns, who won the 2012-13 Kathy McGough Academic Award as the top student-athlete at SFA, ranked in the top 20 in kills, service aces and hitting percentage during the 2012 season. She was the co-recipient of the Stephen F. Austin Volleyball Michelle Reid Leadership Award while earning second-team all-conference distinction.

She was the only Ladyjack to start all 34 matches this past season and ranked second on the team in kills and finished her career ranked ninth all-time in blocks.

The award was established in memory of Dr. F.L. McDonald in 1996-97, a former president of Lamar University and 1999 Southland Hall of Honor inductee. McDonald served as Lamar's president in 1963 when the Southland Conference was established and is considered one of the league's founding fathers.

Each member institution may nominate one male and one female student-athlete who meet the following criteria: a letterwinner in a conference sport, be on track to graduate during the spring in which they are nominated or the subsequent summer, and plan to attend graduate school no later than the second fall following receipt of the award.

Burns is the second consecutive SFA female athlete to claim the scholarship after track and field's Carrie Hahn earned the award last year.