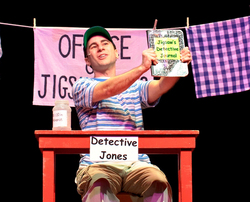 The Children's Performing Arts Series at SFA will present "Jigsaw Jones: The Case of the Class Clown" in two performances at 9:30 a.m. and 12:30 p.m. Friday, Oct. 25, in W.M. Turner Auditorium on the SFA campus.

Based on James Preller's best-selling mystery series for young readers, "Jigsaw Jones: The Case of the Class Clown" was adapted by ArtsPower's Artistic Director Greg Gunning with music by Richard DeRosa and lyrics by Gunning. It's the story of Athena Lorenzo, who has been slimed, and she does not appreciate the practical joke. It is up to Theodore "Jigsaw" Jones, who claims to be the very first detective in the school, and his friend Mila to investigate the sliming and track down the second grade class clown.

"The production is brimming with music, charm and humor," said Diane J. Peterson, SFA Fine Arts Box Office manager and CPAS director, "and touches on the topics of friendship, bullying and trust."

Audiences will laugh as they learn the secret codes that Jigsaw must decipher to solve the mystery.

"Jigsaw Jones" features four professional actors from New York City, an upbeat, Broadway-style musical score and imaginative sets. The show opened in 2009 and has become one of ArtsPower's most popular productions.

CPAS performances are at 9:30 a.m. and 12:30 p.m. in W.M. Turner Auditorium on the SFA campus. Tickets are $6 for individuals and $5 per person for groups of 20 or more. This production targets children in first through fourth grades.

Visit the CPAS website at www.cpas.sfasu.edu or call the Fine Arts Box Office at (936) 468-6407 for more information.