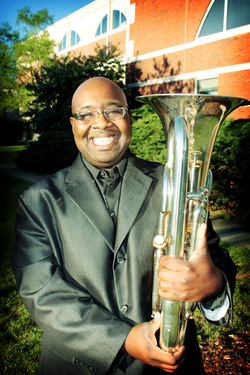 "Thurman is considered one of the stars of the formidable generation of brass soloists," said J.D. Salas, assistant professor of tuba and euphonium studies at SFA. "His euphonium playing has been described as 'awe inspiring,' and he is touted as an amazing musician."

Over the last 10 years, Thurman has been an invited guest artist/clinician at many of the world's prestigious euphonium festivals, including the International Tuba/Euphonium Conference, U.S. Army Band Tuba and Euphonium Conference and the Leonard Falcone Competition.

Thurman is also an active chamber musician. He plays first euphonium and trombone in the highly regarded Sotto Voce Quartet, which tours extensively. He also plays first baritone horn in the Brass Band of Battle Creek, a British brass band comprised of many of the world's best brass and percussion performers. In addition to his chamber music work, Thurman is in demand as a euphonium specialist for many symphony orchestras, including the Atlanta, Eastern Music Festival and North Carolina symphony orchestras.

"Octubafest is a concert series held at universities all over the country celebrating the tuba and euphonium as a solo and chamber instrument," Salas said.

Ron Petti, director of accompanying for the School of Music, will accompany Thurman, whose program will feature "Songs of a Wayfarer" by Gustav Mahler and "Pearls" by Roland Szentpali, which Salas described as "a fantastic work in three distinct movements."

"This work will challenge soloist and pianist," Salas said. "The first movement has a slight rock and funk feel to it, while the second is a lovely melody. The final movement has a very exciting tango feel to it."