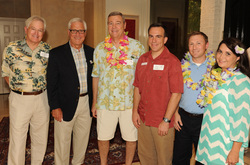 Nacogdoches Mayor Roger Van Horn recognized the program sponsors, including Cal-Tex Lumber Company, Nacogdoches Medical Center, First Bank & Trust of East Texas, Regions Bank and Walmart. The Ledbetters were presented with a gift of artwork from Piero Fenci, professor of ceramics in the SFA School of Art, for opening up their home for the event.

The annual fall event serves as a membership drive and fundraiser for the Dean's Circle with current and former students, faculty, businesses and supporters of the College of Fine Arts donating items for a silent auction.

The Dean's Circle is an auxiliary group of community members founded in 2008 and dedicated, in part, to nurturing potential young artists within the College of Fine Arts, according to Dr. A.C. "Buddy" Himes, dean.

"External support organizations, like the Dean's Circle, demonstrate the symbiotic relationship between the community and SFA," Himes said. "Supporters realize that, by making an investment in the future of the College of Fine Arts and in the strength of the university, they are also investing in the community."

In addition to recognizing the accomplishments of and the potential within students, the Dean's Circle is also focused on enhancing instructional opportunities for fine arts faculty.

"From nothing more than a cause that I believed to be worthy and noble has grown dozens of outstanding role models among students in each of the college's disciplines," Himes said, "and the goal of completing our first endowed professorship is now in sight."