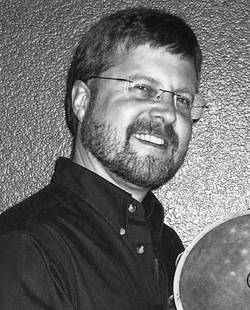 Acclaimed percussionist Christopher Deane will perform with SFA students in a recital at 7:30 p.m. Monday, Feb. 25, in Cole Concert Hall on the SFA campus.

NACOGDOCHES - Christopher Deane, associate professor of percussion at the University of North Texas, will perform with the SFA Percussion Ensemble in a recital at 7:30 p.m. Monday, Feb. 25, in Cole Concert Hall on the campus of Stephen F. Austin State University.

The concert will feature ensemble and solo compositions composed by Deane, including "Dis Qui Etude" performed by Brad Meyer, director of percussion studies at SFA, for solo vibraphone. The piece utilizes specifically crafted mallets made from common items found at hardware stores, such as paint stirrers, rubber stoppers, moleskin and masking tape, according to Meyer.

Deane will be featured on two solo pieces, including "Colossus" by Eric Rhodis, which will highlight Deane's "masterful timpani expertise," according to Meyer. The piece will be guest conducted by Scott Harris, interim director of the School of Music. "Concerto pour vibraphone" by Emmanuel Sejourne will showcase Deane's artistry on the vibraphone.

"I have known Christopher Deane for almost 20 years and have always been impressed and amazed at his musical sensitivity and versatility," Harris said. "His compositions have become standard repertoire in the percussion literature, and his sense of long, sustained lines, coupled with developing musical drama, is a unique quality in his music."

Deane will also spend time on campus working with SFA percussion students in a master class and clinics focusing on classical excerpts and interpretation, contemporary tambourine techniques and general musicianship.

Prior to his appointment to UTN, Deane was the principal timpanist of the Greensboro Symphony and a regular performer with the North Carolina Symphony. He has performed with numerous orchestras around the nation and has won prizes in composition from the Percussive Arts Society. Deane is an artist/educator clinician for Innovative Percussion Company, Sabian Cymbals, Dynasty Corporation and Black Swamp Percussion.

"If you are looking to hear/see a concert unlike any concert you've experienced before, you need to come to this concert," Meyer said. "Deane not only utilizes standard ways of creating music, but invents new exciting techniques and methods that explore the unlimited sonic possibilities of the percussion world."

Deane's guest performance is a joint presentation of the SFA College of Fine Arts and the School of Music and is a featured event in the Cole Performing Arts Series. Tickets are $5 for adults, $4 for seniors and $2 for students. For tickets or more information, call the Fine Arts Box Office at (936) 468-6407.