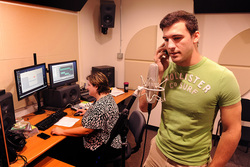 CC Conn, assistant professor of lighting and sound design for the SFA School of Theatre, records cell phone conversations by Sugar Land junior Daniel Miller in preparation for the opening of the School of Theatre's production of "Dead Man's Cell Phone," which runs Oct. 8 through 12 in W.M. Turner Auditorium.

NACOGDOCHES, TEXAS - When the Stephen F. Austin State University School of Theatre opens "Dead Man's Cell Phone" Tuesday night, Oct. 8, in W.M. Turner Auditorium, there are a few noteworthy aspects of the production that may not be automatically recognizable … at least not until you open the program.

The play is written by award-winning female playwright Sarah Ruhl, and it's directed by Laura Rikard, assistant professor of acting/directing in the School of Theatre. In glancing down the page at the list of credits, one sees that the lighting and sound design is by CC Conn, assistant professor of lighting/sound design, and the costumes are designed by Angela Bacarisse, professor of costume design. Only a few men are involved, notably two male student actors and scenic designer Richard Ellis, a visiting professor.

"We are doing a play by a female playwright," Rikard said, "and we have a female director and two female designers. Sarah Ruhl is considered to be one of our great modern playwrights. Ruhl is produced by professional theatres every year, and she will be studied by theatre students who will be performing and auditioning for her plays for years to come."

Like all master playwrights, Ruhl has created her own unique style, and part of the challenge in directing and performing her plays is analyzing her text in order to comprehend the style, Rikard explained.

"The script is tricky to navigate because, at first, you think she is writing in contemporary realism, but in fact she is not writing realistically at all," she said. "This particular play is realistic to the extent that it is set in the 'here and now,' but it lives in a surreal world. The script demands that the actors be versed in various styles of performance in order to execute the scenes. In one scene, an actor maybe asked to use skills based in melodrama, clowning and realism. As in the writings of Shakespeare, the mood is like a pendulum that swings from dark to light, laughter to tears, and back in an instant."

The play premiered in 2007 and won a Helen Hayes Award for Outstanding New Play. It examines the conflicts between present-day technology's ability to connect and isolate people in the digital age. "Dead Man's Cell Phone" is a wildly imaginative comedy centered on a woman confronting her assumptions about morality, redemption and the need to connect in a technologically obsessed world, according to Rikard, who is directing her first SFA College of Fine Arts University Series and SFA School of Theatre Mainstage production. Rikard's Nacogdoches directing debut was this past summer with SFA Summer Repertory's production of "Charlotte's Web."

In the past year, Rikard was brought on board at the School of Theatre as the new acting and movement professor, Zach Hanks as assistant professor of acting and voice, and Laura Simms as an adjunct professor in theatre.

"We are profoundly lucky and grateful that the faculty who came before us built a strong, excellent program, and I hope that our experience can help to expand and keep it up to date with the ever-changing profession of the performing arts," Rikard said. "Zach and I still continue to audition and work in the acting industry, and Laura is a professional career coach with experience as an actress. I hope that we can be an example for our students and continue to make connections for them for when they graduate and enter the profession."

"There are sound effects, such as the constant ringing of a cell phone, that drive the action of the play," Conn said. "In addition to that, the style of the production is such that the scenes are connected with movement with the cast being ever-present on stage. These transitions between scenes use extensive music and voices like overheard cell phone conversations. It is the recording of the voices and mixing of these transitions in addition to a great deal of underscoring that make the sound design large in scale."

Many students are lending their voices to the recordings, getting a little improvisation experience and voice recording experience. Nacogdoches freshman Devin Bruton has been learning the sound programs by helping Conn gather sounds and recording conversations. Nacogdoches sophomore Jessica Skidmore is the sound-board operator for the show and will be getting extensive experience with the sound playback program, SFX, as much of the sound will employ a surround sound technique where each sound is assigned to specific speakers throughout the theatre.

"The sheer quantity of computerized sound files to be created and the level of difficulty in doing surround playback makes this show challenging," Conn said. "We rarely get the opportunity to employ this particular sound style. The last use of this to this degree was in 'Woyzeck' (2009). So it is definitely time for a new set of students to get this opportunity."

Designing costumes for a contemporary play is different than designing for a play that takes place in another time and place.
"You are working more as a stylist than as a designer," Bacarisse said, "and you are putting together a 'look' based on a type of character. This involves a lot of shopping.

"I start with contemporary images from catalogues, the Internet and magazines," she said. "I put together collages of the characters to see if what I am thinking for them is in line with what the director envisions for the characters."

Availability of what is needed, especially in a small city, is always a consideration, Bacarisse said.

"I do a lot of local shopping, and I find some amazing things," she said. "But it can be tough when I need a very specific garment. I may pay for two-day shipping, but I live in a small town in East Texas, and two-day shipping usually arrives in about seven days. Regular shipping takes much longer."

Specific to this play are clothes that are mentioned in the script, Bacarisse said.

"When someone on stage says, for example, 'My, you're all dressed in red,' that actor had better be wearing red," she said. "This play calls for specific colors and styles. It took me three weeks to find a blue raincoat that wasn't over $100 - one that fit the actress and was the correct style for the character, and where the store accepted the SFA credit card.

"And really, shopping for a rain coat during a drought?" she said with a laugh. "Everyone looks at you like you are insane. I finally found something I could use, not exactly what I was looking for, the day after the rains hit Nacogdoches! I know everyone thinks, 'How hard is it to find a raincoat?' You have no idea.

"The playwright is very specific with her choices," Bacarisse said, "and if you change, them you change the play."

Prior to the opening night performance, there will be a 7 p.m. informative talk about the author and the play presented by Rikard in Griffith Gallery located across the hall from Turner Auditorium. The audience is invited back to the gallery for a post-performance reception to meet the cast, crew and director and to honor the event's corporate sponsor, Tipton Ford Lincoln.

This play is recommended for mature audiences. Please visit www.theatre.sfasu.edu and click on the On Stage button to view the content advisory. If it were a movie, "Dead Man's Cell Phone" would be rated PG-13.

Single tickets for "Dead Man's Cell Phone," which is also included in the School of Theatre's Mainstage Series, are $20 for adults, $15 for seniors and $7.50 for students and youth. For tickets or more information, call the SFA Fine Arts Box Office at (936) 468-6407 or visit www.finearts.sfasu.edu.