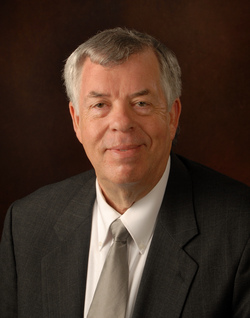 NACOGDOCHES, Texas - Stephen F. Austin State University alumnus James H. Dickerson of New Braunfels, a former member of the SFA Board of Regents, will offer the commencement address during spring graduation ceremonies on May 11.

A 1968 graduate, Dickerson majored in chemistry and minored in biology at SFA. He worked for Dow as a research chemist from 1968 to 1979 in Freeport, Texas, and Montreal, Quebec. During that time, he authored a U.S. patent for a novel way of making container glass.

Dickerson attended law school at night and earned a law degree from South Texas College of Law in 1979 before joining his company's Intellectual Property Department. He was appointed to the SFA Board of Regents by Gov. Rick Perry in 2007. His term expired in January, and he most recently served as secretary of the board.

Recently appointed by the governor to the Texas Medical Board District Review Commission, Dickerson also is a member of the Comal County Habitat for Humanity Board of Directors, the New Braunfels City Ethics Commission, and the United States Patent and Trademark Office. He is a former member of the New Braunfels Public Library Foundation and an inactive member of The State Bar of Texas.

Due to a high number of expected graduates of SFA this spring, commencement exercises will be split into two ceremonies for the first time in the university's history. Dickerson will provide the commencement address at both ceremonies.

Master's and doctoral candidates will graduate with their respective colleges, and both ceremonies will be held in William R. Johnson Coliseum.