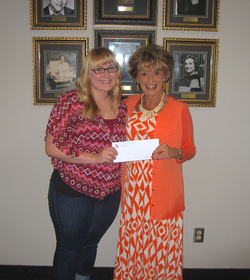 "Thanks to the efforts of everyone who has been involved in the Friends of Theatre over the past five years and the generosity of our many donors, we have established an endowment that will provide a very helpful scholarship to a deserving SFA student every year," Williams said. "It's especially gratifying to know that this will continue in perpetuity."

Senior theatre major Vanessa Hendricks of Emory was selected by the School of Theatre faculty to receive the first Friends of Theatre Scholarship. Hendricks, who is also the president of SFA's chapter of Alpha Psi Omega, the national theatre honor society, is in the theatre teacher certification program and currently interning at Lufkin High School. She will direct the production of the full-length play "Wit" scheduled for Nov. 8 and 9 in the Downstage Theatre. She appeared in last year's Mainstage Series production of "Stage Door," among other shows.

"I couldn't be more grateful to the Friends of Theatre," Hendricks said. "I really appreciate how hard Rhonda and the rest of the group have worked to make this scholarship possible."

"Additional contributions to build the endowment will always be welcome," Williams said, "but now we're ready to take on a new challenge." The Friends of Theatre will spend the upcoming year raising funds to help promote School of Theatre productions, "and raising friends to go to the shows with us and help us spread the word about them," she said.

"Everyone who goes to an SFA theatre production is impressed by the high quality of all aspects of the show, and especially the talent of the students onstage," Williams said. "We're asking friends of theatre, both new and longtime supporters, to commit to attending one of the first performances of a few of this year's productions and then talking about the shows on social media, around the water cooler at work or over the back fence at home."

To kick-start the audience development effort, Williams will host a free event from 5:30 to 7:30 p.m. on Monday, Sept. 30, at Union Café, 3205 N. University Dr. at the corner of E. Austin Street in Nacogdoches. Complimentary beverages and appetizers will accompany information about upcoming SFA theatre productions, how to get tickets and how to encourage others to attend the shows.

"It will be a fun and casual time to get together and organize the effort to strengthen this highlight of our local culture," Williams said. Those planning to attend the event at Union Café are asked to RSVP to Liz Barkowsky in the School of Theatre office at (936) 468-4003 by noon Monday, Sept. 30.