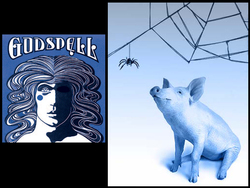 'Godspell' and 'Charlotte's Web' to be featured in SFA's summer theatre season.

NACOGDOCHES, TEXAS - The 2013 Summer Repertory season of the Stephen F. Austin State University School of Theatre will feature popular productions that will inspire and entertain audiences of all ages.

Each of these performances would make excellent summer outings for various groups, such as church organizations, vacation Bible school students or children in day care, according to Scott Shattuck, director of the School of Theatre.

"Last year's productions of 'Steel Magnolias' and 'How I Became a Pirate' were our most popular summer shows yet, and this year we've chosen favorite stories and popular songs to appeal to an even wider range of audiences," Shattuck said.

Based on the Gospel According to Matthew, "Godspell" is a high-energy musical highlighting biblical parables, with Jesus preaching kindness and love to a new generation. The musical features storytelling with clowning, vaudeville and pantomime along with a score that ranges from pop to rock to blues to gospel. The hit song "Day by Day" is perhaps the best-known number. The director of the original production, John-Michael Tebelak, conceived the musical and collaborated with Schwartz, who also penned the songs for the current Broadway hits "Wicked" and "Pippin," to write it.

"'Godspell' is one of the most popular musicals of the rock era, and not by accident," Jones said. "The story is always relevant, the stage presentation is energetic and often hilarious, and the music ranges from the buoyant to the beautiful to the powerful."

"Charlotte's Web" is the story of a lonely little pig named Wilbur who becomes a local sensation on Zuckerman's farm thanks to the efforts of his new best friend, a kind and generous spider named Charlotte. The play, adapted for the stage by Robinette, is based on White's beloved classic novel, which teaches young readers about the power of belief and the meaning of true friendship.

"Our 'Charlotte's Web' is a perfect outing for the whole family," Rikard said. "Everyone from toddlers to grandparents are sure to enjoy the incredible talent of these SFA theatre students and this unique interpretation of a modern classic about friendship, loyalty and love."

"In the past, some families, especially those with several children, have asked us if there's a more affordable way to see our show for young audiences," Shattuck said. "This year, Walmart is making it possible for us to offer one performance of 'Charlotte's Web' at which each family can set their own ticket prices based on their ability to pay. We're extremely grateful to have such a generous community partner in our local Walmart store."

All performances are in W.M. Turner Auditorium, located in Griffith Fine Arts Building on the SFA campus.