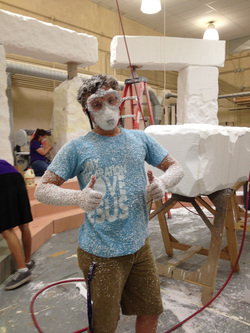 SFA sophomore theatre major Troy Carrico of Austin carves Styrofoam for the set of the upcoming Summer Repertory production of "Godspell." The show opens at 7:30 p.m. Thursday, June 27, in W.M. Turner Auditorium on the SFA campus.

NACOGDOCHES, TEXAS - When the cast of "Godspell" takes the stage Thursday night in W.M. Turner Auditorium on the campus of Stephen F. Austin State University, it will be a "first" for SFA theatre Professor Rick Jones and some of the student cast members.

"It's the first show I will have directed twice," Jones said.

Jones first directed "Godspell" 34 years ago when he was a theatre teacher at a small college in Kentucky. In addition to this production being created with different people, the space is different this time around. The new production will be performed in spacious Turner Auditorium as opposed to the college chapel where Jones directed it before.

"We have a bigger and more flexible space where we can do more with levels and with lighting," he said. "There are lots of opportunities that exist now that didn't in that time and place, and I have a lot more people to work with than I did then."

With a cast of only 10, "Godspell" was a good choice for the summer season when fewer students are enrolled at SFA and when those same students are doing double duty in "Charlotte's Web," the other production in the 2013 Summer Repertory theatre season for the SFA School of Theatre.

For example, Katy junior April Gore is stage manager for "Charlotte's Web" in addition to being a cast member in "Godspell." Gore will sing what many consider to be one of the best-known songs from the musical, "Day By Day." Known in the School of Theatre as "one of our best stage managers," Gore also is "quite a good singer and brings a lot of good energy," Jones said.

"I think that one of the exciting things about Summer Rep is that it gives students an opportunity to take a step up in responsibility or to try something they haven't done before," he said.

There are also students featured in "Godspell" who have established themselves as accomplished actors in the SFA theatre program. San Antonio junior Allison Day, who played the female lead in SFA's production of "Little Shop of Horrors" last fall, along with Houston senior Sarah Wisterman, who had a featured role in "The Madwoman of Chaillot" and a lead role in "bobrauschenbergamerica," are among the "Godspell" cast members. Wisterman will also play the role of Charlotte in "Charlotte's Web."

But there are those who have not had those kinds of opportunities yet, Jones said. Gore is acting at the collegiate level for the first time in "Godspell." Whitehouse senior Mary Creath is acting in Turner Auditorium for the first time. Fort Worth sophomore Josh Lopez has had small roles in "The Madwoman of Chaillot" and in "Stage Door," but will play a leading role in "Godspell" as John the Baptist/Judas.

"Virtually everyone in the company is doing something in both shows," he said.

Having significant roles in both productions "is a lot of work," Wisterman said, "but it is 100-percent rewarding."

As Jesus, his character has "a lot of lines, a lot of songs, a lot of dancing and a lot of things to remember," Davids said. "Whereas Lurvy is a smaller part, but he's got a lot to do. So both shows require a lot of energy from me. By the end of the day, I'm pretty exhausted.

"But it's been really cool to get to do this," he said. "They say that Summer Rep is about as real as it gets in the real world. And I love the fact that theatre is all you do all day. Whether you are acting or building something, you're theatre-involved all day. It's great to be able to dedicate your entire being to the craft and to the shows."

Conceived and originally directed by John-Michael Tebelak with music and new lyrics by Stephen Schwartz, "Godspell" opened at the famous Café La Mama in 1971. It played more than 2,000 performances off-Broadway and more than 500 on Broadway, where it moved in 1976.

Loosely based on the Gospel According to Matthew, "Godspell" incorporates a range of theatrical techniques from magic tricks to soft-shoe dancing to tell stories from the life of Jesus and enact Biblical parables. "Ultimately," Jones writes in the program note from the director, "this is a play about the formation of a community based on love, acceptance and forgiveness."

Group discounts are available for both "Godspell" and "Charlotte's Web." Call the SFA Fine Arts Box Office at (936) 468- 6407 or (888) 240-ARTS for more information, or visit boxoffice.sfasu.edu for a complete performance schedule.

All performances are in W.M. Turner Auditorium, located in Griffith Fine Arts Building on the SFA campus.

Parents are urged to use discretion before bringing very young children to "Godspell." A content advisory is available at theatre.sfasu.edu. Click on the "Godspell" link under the On Stage/Summer Repertory listing.