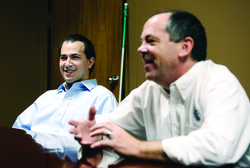 Rudy Becerra, left, smiles at comments by his former teacher Michael Munro, who trains future teachers to work with visually impaired students through the James I. Perkins College of Education at SFA. (Daily Sentinel photo by Andrew Brosig)

Rudy Becerra may not be able to see, but the Stephen F. Austin State University graduate student has a vision for the future. Just ask Gov. Rick Perry who recently signed a bill Becerra helped draft into law.

Becerra said he has been visually impaired since birth, though he did not become blind until multiple surgeries to repair his glaucoma went awry around the age of 5.

But this 31-year-old counseling student has not let his disability get in the way of his passion to help others with visual impairment.

When Becerra was growing up in the public school system, his education was a "mixed bag," he said.

"There were times when I had the most current, assistive technology," he said. "I had access to braille, braille textbooks, assistive equipment that would help me see like scientific diagrams and whatnot." There were other times, however, when Becerra was given nothing at all. In many ways, he was left behind and had to catch up to his peers academically.

When Becerra moved from his hometown north of Dallas to Nacogdoches in 2004 for his undergraduate degree, he decided to major in rehabilitation services.

In 2009, he took part in the Texas Legislative Internship Program in the office of Sen. Rodney Ellis (D-Houston). This experience paved the way for what Becerra would eventually accomplish during the 83rd Legislative Session, when he actually helped draft a bill that has now become law.

It all started in 2012 when Becerra asked his former professor, Michael Munro, if there were any ways he could improve the education of visually impaired students during the legislative session. The SFA professor helps prepare teachers to become specialists in visual impairment.

"He talked about the Expanded Core Curriculum," Becerra said, adding that there were a lot of disparities as far as "who gets what" education in current laws.

"Given my background and experience in public education, I just said 'well, I'll look into it.'" So he did.

Becerra went home and started reading every law pertaining to visually impaired people and public education. What he found were wide gaps and ambiguous language.

"These areas were not really identified in state law, and Michael told me about that," Becerra said. "So I decided to go ahead and try to clarify these areas."

"I mentioned it to Rudy one day, and then next thing I know I'm in an advocacy meeting and he's bringing the first version of a bill for support," Munro said, adding that Becerra garnered the support of Alliance for Visually Impaired Texans.

By the end of the meeting, Munro said, they were referring to the proposed legislation as "Rudy's Bill."

Munro said these services can help the visually impaired succeed, because 90 percent of what people learn is learned visually.

"Our students sometimes have to be taught not only what's out there, but how to participate and how to modify and take part even in recreation and leisure activities," Munro said.

SB 39 was signed by Perry on June 14, making Texas the first state to include ECC in the language of its laws regarding visually impaired students. According to Becerra's talking points, it "clarifies the areas of special education and instruction that must be addressed to meet the unique needs of students with visual impairments."

State law already said students with visual impairments should be evaluated in every area relating to the disability, and that they receive special instruction in accordance with their disability. But Becerra and his former professor, Munro, believed that the language in the laws was outdated. In his talking points, Becerra states that "current statutes are not clear, current or consistent as to what those areas are."

Munro said Texas is already a leader in the United States for those with visual impairment, and this law will only improve its reputation. "We're very lucky to be in the state of Texas," he said. "We have things like the Texas School for the Blind, very strong advocacy and support from TEA."

Even then, Munro said many visually impaired students are sent away from their families to go to specialized schools because the public school system does not always have what it takes to support blind students.

"They should already be providing that ... but I think that with this law in place, it will clarify and ensure that it does happen, at least here in Texas," Becerra said.

Munro said teachers of the visually impaired should be focusing on the ECC, instead of just being tutors.

"I think a lot of times with the teachers of students with visual impairments - there's a perception that they need to be teaching math, science, reading - when in actuality they need to be focusing on these areas (ECC)," Becerra said. "They help the classroom teacher teach algebra and math and everything else."

Becerra said he is passionate about this because of what he endured as a public school student. When Becerra was in high school, his family moved, placing him in a different school district. That district did not support him in his wish to attend Texas School for the Blind in Austin. Becerra said the new school district's representatives made a lot of promises to him if he stayed, but they did not deliver.

"I spent the first week just sitting at the desk with nothing to do," he said. "They said 'Rudy, you want a Cadillac education. All we're offering you is an economic Honda.'" This is why Becerra cares so much about the education of other visually impaired students.

"Because of that, I decided if there's a time when I have an opportunity to advocate on behalf of people with disabilities, I'm going to take it." 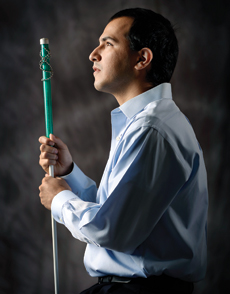