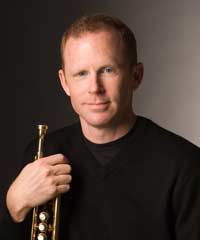 Dr. Grant Peters, professor of trumpet at Missouri State University, will perform a guest recital at 7:30 p.m. Tuesday, Sept. 24, in Cole Concert Hall on the SFA campus as part of this year's Cole Performing Arts Series.

NACOGDOCHES, TEXAS - The Stephen F. Austin State University School of Music will present Dr. Grant Peters, professor of trumpet at Missouri State University, in a recital at 7:30 p.m. Tuesday, Sept. 24, in Cole Concert Hall in the Wright Music Building on the SFA campus.

Part of the 2013-2014 Cole Performing Arts Series, the recital will feature Peters performing Paul Hindemith's Sonate for Trumpet and Piano, "Four Miniatures" by Joseph Turrin, and "Night Sun Journey" by Meg Bowles. Peters will be joined by Dr. Gary Wurtz, professor of trumpet at SFA, on Francesco Manfredini's Concerto for Two Trumpets.

As a special treat, a third performer will be added to form a trio to perform music by Rafael Mendez. Dr. Leonard Candelaria, former Regents Professor of Trumpet at the University of North Texas, and teacher to both Peters and Wurtz, will share the stage with his two former students to end the evening.

Peters is a member of the Springfield Symphony Orchestra and Springfield Regional Opera. He serves on the board of directors of the International Trumpet Guild.