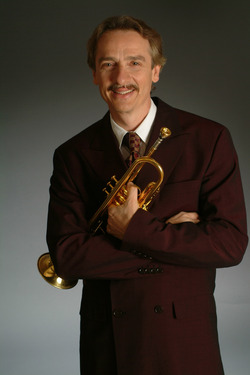 NACOGDOCHES, TEXAS - The Swingin' Axes and Swingin' Aces jazz bands at Stephen F. Austin State University will perform an exciting evening of music for the final joint concert of the 2012-13 season beginning at 7:30 p.m. Thursday, April 25, in Cole Concert Hall on the SFA campus.

The highlight of the night will be the performance by world-renowned trumpeter Allen Vizzutti with the Swingin' Axes. His visit to the SFA campus is made possible through the fundraising efforts of the SFA Friends of Music, according to Gary Wurtz, professor of trumpet and jazz studies at SFA.

Vizzutti's performance will mark his third trip to the SFA campus, having first appeared with the Swingin' Axes in November 1999 and then returning the following year as a featured soloist with the SFA Wind Ensemble.

"After our last concert, I thought this particular group of students needed to perform with a great artist," said Wurtz, who has been director of the Swingin' Axes since 1993. "I called Allen over spring break and asked if he was available. As it turned out, our concert week was between dates for him, and he was immediately agreeable to the invitation. I was thrilled, but the students were taken aback that they were going to get this opportunity.

"We have hosted a large number of world-class guests over the years," Wurtz continued, "but Allen is always an easy invite because, musically, he's as good as anyone in the world with the resumé to back it up, and he's great with the students and patrons. He is as nice a guy as you could ever meet, and I love to introduce my students to guys like him."

Equally at home in a multitude of musical idioms, Vizzutti has visited 40 countries and every state in the union to perform with artists and ensembles such as Chick Corea, 'Doc' Severinsen, the NBC Tonight Show Band, the Airmen of Note, Chuck Mangione, Woody Herman, the New Tokyo Philharmonic, the Budapest Radio Orchestra and others. Performing as a classical and jazz artist, often in the same evening, he has appeared as guest soloist with symphony orchestras in Germany, St. Louis, Seattle, Rochester, Syracuse, Milwaukee, Buffalo, Phoenix, Croatia, Slovenia, Edmonton, Vancouver and Winnipeg, to name a few.

While living in Los Angeles during the 1980s, Vizzutti performed on more than 100 motion picture sound tracks, including "Back To the Future" and "Star Trek," as well as on countless TV shows, commercials and recordings with such artists as Frank Sinatra, Barbra Streisand, Neil Diamond, the Commodores and Prince. His sounds can be heard on recent projects, including the movies "Furry Vengeance," "40 Days and 40 Nights" and "Scary Movie Four" and on video games.

In addition to accompanying Vizzutti, the Swingin' Axes will perform Willie Maiden's "A Little Minor Booze" and Pat Metheny's "Minuano."

For its portion of the concert, the Swingin's Aces, under the direction of Deb Scott, associate professor of trombone and jazz studies at SFA, will perform "Cajun Cookin'" by Denis Diblasio, "Live and Let Die" by Paul and Linda McCartney, "Invitation" by Bronislau Kaper, "Cut 'N Run" by Gordon Goodwin and "Chelsea Bridge" by Billy Strayhorn, featuring the band's lead trumpet player, Wylie sophomore Chris Jordan.

The joint concert is a presentation of the SFA College of Fine Arts and School of Music. Tickets are $5 for adults, $4 for seniors and $2 for students and youth. For tickets or more information, call the Fine Arts Box Office at (936) 468-6407 or visit www.finearts.sfasu.edu.