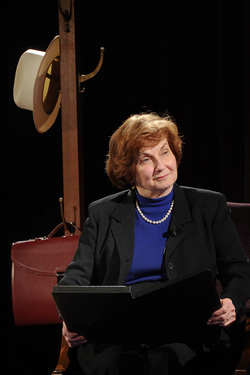 The event is scheduled for 7:30 p.m. Thursday, April 11, in the Baker Pattillo Student Center Grand Ballroom on the SFA campus.

The speaker series was created in 2010 to honor Dr. Archie McDonald, who taught history at SFA for 48 years. The author/editor of more than 20 books, McDonald also served as a weekly commentator on Red River Radio, a National Public Radio affiliate.

Judy McDonald served on the Nacogdoches City Commission for 18 years, was the first female mayor of Nacogdoches and inspired the humorous self-help book authored by her husband, "Helpful Cooking Hints for HouseHusbands of Uppity Women."

"The privilege of having this series named in his honor was the highlight of Archie's career," McDonald said. "I am thrilled to be invited to participate and honored to help perpetuate this event."

"It is especially fitting that this event will feature Kay Bailey Hutchison," McDonald said. "She has been such a good friend to both of us for many years. I especially admire her continued work to document the history of women who have greatly influenced the formation of the United States, and most especially the women of Texas."

The event is free and open to the public. Free passes may be obtained at the Involvement Center on the first floor of the Baker Pattillo Student Center or at the Nacogdoches Convention and Visitors Bureau downtown. For more information, call (936) 468-2605.