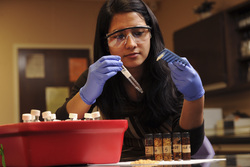 SFA biotechnology graduate student Ranjeeta Gautam of Nepal is part of a team conducting grant-funded research on the DNA of the Sunn pest, which threatens crops throughout Northern Africa, Northern Asia and Eastern Europe.

A $21,000 grant from the International Center for Agricultural Research in Dry Areas will help Stephen F. Austin State University continue its research on the Sunn pest, an insect responsible for destroying wheat crops around the world.

This is the third time SFA has received research funding for the project from ICARDA, and the support already has led to important breakthroughs, according to Dr. Beatrice Clack, an associate professor in SFA's Department of Biology and Biotechnology.

"The Sunn pest is responsible for destroying millions of acres of wheat crops throughout Northern Africa, Northern Asia and Eastern Europe," Clack said. "Since bread is a main food source for the people who live in these areas, the damage caused by Sunn pests results in food shortages and can be life-threatening."

As it feeds, the insect secretes an enzyme that degrades the gluten proteins found in wheat seeds. Gluten acts as a binding agent and gives dough its elasticity. Without it, baked goods become dry and crumbly.

"Typically, the pests contaminate only a small percentage of the crop; however, the enzyme is so potent that during the milling process, entire lots of grain are rendered useless once the affected and healthy grains combine," Clack said.

Clack's team, made up of SFA biotechnology graduate students, has isolated and characterized the enzyme responsible for the gluten degradation and hopes to develop either enzyme inhibitors to counteract it or bio-pesticides to eliminate the Sunn pests. She says the team has successfully cloned the enzyme, which will enable researchers to better understand how it functions.

"We can now make the enzyme outside of the insect," Clack said. "This is important because the insect is not native to North America, and U.S. agriculture agencies closely monitor the importation of live pests to study."

Clack's team is currently studying the Sunn pest's DNA at each of the five stages in the insect's life cycle in hopes of determining exactly when the insects develop the enzyme. The results of the research could be used to produce a bio-pesticide that kills the insect before it can harm any crops.

SFA researchers also are working to identify a casein (milk protein) inhibitor that would shut down the dangerous enzyme. Jeffrey Hargrove of Kingwood, an SFA biotechnology graduate student, is involved in the casein research and says a peptide found in yogurt and other dairy products looks promising.

"Specifically, I am characterizing the extent to which casein peptides are able to inhibit the enzyme," Hargrove said. "Currently, farmers in the affected areas rely on expensive and harmful pesticides to minimize crop damage. Casein peptides are much safer for human consumption and the environment."

The enzyme inhibitor could be applied to the affected grain - even after it is harvested - and prevent it from dissolving the wheat seeds, he said.

Clack said she first heard about Sunn pests from a former SFA graduate student, Charles Darkoh. As a biotechnology student, Darkoh was seeking more information about Celiac disease, an autoimmune disorder of the small intestine that impedes gluten processing.

"In conducting his research, Charles began to look into whether or not an enzyme might exist that could degrade gluten. He was online researching this when he read about Mustafa El-Bouhssini, an investigator from Syria, who was working with an insect that destroys wheat seeds - the Sunn pest," Clack said.

Darkoh then contacted El-Bouhssini, who he learned worked with ICARDA, and asked if some of the damaged wheat seeds could be sent to him. He wanted to see if the pest left behind an enzyme, Clack said. "Sure enough, it did."

Sunn pests are not a crop threat in North America because most U.S. crops are planted in temperate climates and on flat lands, Clack said. The pests prefer to live in dry areas where they can "winter" in the mulch along the hillsides. When the wheat is planted and begins to grow, the pests make their way from the hillsides to the nearby fields and begin laying eggs, which hatch and eventually contaminate wheat crops.

"Dr. Clack's approach of utilizing the power of biotechnology to mediate these important problems that affect the lives of millions is commendable," said Darkoh, who is now an assistant professor at the University of Texas Health Science Center in Houston. "This research is very important and may one day lead to the treatment of Celiac disease and a solution to a major pest problem that can affect the livelihood and food safety of the majority of people living in the Middle East and North Africa." 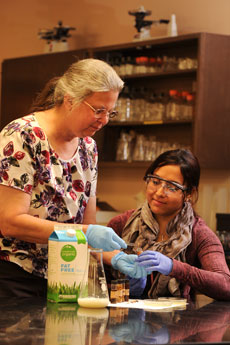 SFA biotechnology graduate student Swarnali Basak of India (right) is pictured with Dr. Beatrice Clack, an associate professor in SFA's Department of Biology and Biotechnology. Students in the department are conducting research on the Sunn pest, an insect responsible for destroying wheat crops around the world.