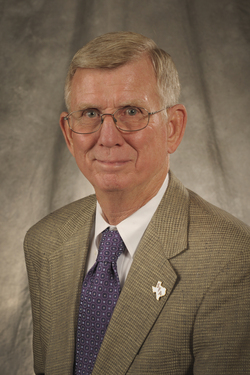 There are three things Dr. John Lewis says he will miss most when he retires from Stephen F. Austin State University in May after more than 43 years on the faculty: "students, students, and did I mention my students?"

Lewis' retirement was approved by the Board of Regents at a recent meeting, during which the members also awarded the longtime educator the title of professor emeritus of finance. Since SFA began awarding finance degrees in the mid-70s, Lewis has taught a required course on financial institutions. Because of this, he holds the distinction of having taught every student who has ever majored in finance at the university.

"I am pretty proud of that," Lewis said of his unique track record at SFA. "There are faculty members who have more horsepower than I do, but I can honestly say I have given my students every bit of the horsepower I have. I don't think I have done any of them a disservice."

From September 2008 to December 2009, Lewis also filled the role of interim vice president for development at the university. He has consulted for SFA's vice president for finance and administration, as well as the SFASU Foundation, serving as a member of the Board of Trustees since 1996. He also was instrumental in the formation of the Nelson Rusche College of Business' chapter of the international business honor society Beta Gamma Sigma.

After four decades of teaching at SFA, Lewis said he is looking forward to joining his wife in retirement, catching up on his fishing and doing a little traveling. He does plan to continue his work with the Foundation and says he may be persuaded to teach an SFA class "here or there" after he takes some initial time away from campus.

"Dr. Lewis' dedication and commitment to SFA can been seen in many different places, but his most impressive accomplishment is that he has benefitted every single finance graduate of SFA, not only by teaching them but also by helping them find employment," said Dr. Todd Brown, chair of the Department of Economics and Finance. "You would be hard pressed to find a banker or financial professional in this town who has not been impacted in some way by Dr. Lewis."

A native of Tenaha, Lewis earned a bachelor's degree in finance and a master's degree in management from Texas A&M University. He joined the SFA faculty in 1969 when SFA's business courses were still taught in the Rusk Building. While teaching full time, he completed a doctorate at Louisiana Tech University in 1975. He was promoted to full professor in 1982.

Lewis, 68, has been named SFA's finance professor of the year eight times and is a past recipient of a Teaching Excellence Grant. He has authored or co-authored more than 20 publications and served as an investment consultant for a local bank for 16 years.

Lewis said students come to SFA much more informed about the financial world than they did in decades past, primarily because of advancing technology. Having up-to-the-minute financial data available at the click of a mouse or the swipe of a smart phone screen has forever changed banking and investing, as well as the way students research and learn about the industry. Lewis has learned right along with his students, and the television and computer screens in his office flash non-stop financial reports.

"At SFA, we really provide our students with a solid foundation in finance, and when they leave here they can compete with students from any university because they have all the tools they need to be successful," Lewis said. "We have alumni who are positioned really well in the industry all over the state, and that is a testament to the program and the faculty."

The Dr. John Lewis Professorship in Finance recently was endowed at SFA. More than 70 individual donors, many of them Lewis' former students, contributed to the professorship. The first award will be given to a deserving faculty member in fall 2015.

"This new professorship will help the university recruit and retain high-quality finance professors who share Dr. Lewis' commitment to SFA finance students," said Jill Still, vice president for university advancement. "I can think of no better way to honor Dr. Lewis and his extraordinary contributions to the university, its students and the Nacogdoches community."

"I couldn't have asked for a better place to get my education in business, finance and economics than SFA, and Dr. Lewis was a big part of that," Collins said. "There is no question that his efforts, along with a number of others in that department while I was in school, greatly impacted my career in a positive way over the years."

Collins has worked closely with Lewis in recent years while they served together on the finance committee of the Foundation's Board of Trustees. The committee relies heavily on Lewis' expertise, he said, especially when it comes to evaluating potential investment opportunities for the foundation.

"The SFASU Foundation would not be nearly as strong as it is today without Dr. Lewis' leadership on the finance committee," Collins said.

Like many of Lewis' former students and colleagues, Collins said he has mixed feelings about the professor's impending retirement.

"On the one hand, he has worked very hard, and I am so happy that he will be able to start a whole new chapter of his life after teaching for so many years," Collins said. "But, on the other hand, I do regret that future students will not have the opportunity that I had to learn from such a talented and inspirational teacher.

"I am sure that someone else at SFA will step up and fill the void and do a fine job when Dr. Lewis retires, but that person will certainly have some big shoes to fill."