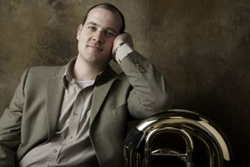 NACOGDOCHES, TEXAS - The Stephen F. Austin State University School of Music will present Ben Pierce, professor of tuba and euphonium at the University of Arkansas, in a guest recital at 7:30 p.m. Wednesday, Oct. 23, in Cole Concert Hall on the SFA campus.

"Pierce is an accomplished low brass artist and teacher," said J.D. Salas, assistant professor of tuba and euphonium studies at SFA. "Pierce has notably been the winner of some dozen international tuba and euphonium artist competitions held in the United States, Japan, Germany, Finland, South Korea, England and Italy."

He is a frequent soloist at home and abroad performing many solo recitals as well as concerti with such ensembles as the premier United States military bands, top American brass bands, and such orchestras as the Tokyo Symphony, Oulu Symphony (Finland), and Vogtland Philharmonie (Germany).

Enjoying a varied ensemble career, Pierce has performed with the Detroit Symphony, the Detroit Chamber Brass, the Toledo Symphony, the Flint Symphony, and the Tulsa Symphony. He has served as principal tubist of the Ann Arbor Symphony and is principal tubist of SONA, formerly the North Arkansas Symphony Orchestra. He is a member of the acclaimed Brass Band of Battle Creek featuring many of the world's greatest brass players.

His performance at SFA will be on tuba and euphonium. Among the works he will perform is Euphonium Concerto by John Stevens.

"It is intended to showcase the tone, range, technical and musical capabilities in the hands of an advanced performer," Salas said. "Particular attention has been paid to the lyrical qualities of the writing, even in the more rhythmic and technical outer movements."

He will also perform "Jabberwocky" by David Gillingham and The Three Romances, op. 94, by Robert Schumann.

Acclaimed pianist Tomoko Kashiwagi will accompany Pierce. Kashiwagi performs regularly with double bass soloist DaXun Zhang nationally and internationally. These performances have taken the duo to such prestigious venues as the Kennedy Center in Washington D.C., the 92nd St. Y in New York, the Gardner Museum and Jordan Hall in Boston and the Suntory Hall in Tokyo. She has been a staff pianist at the University of Texas at Austin and, more recently, was an official pianist at the International Society of Bassists Convention in San Francisco.