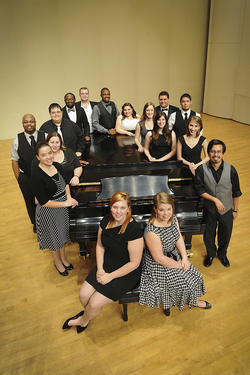 The SFA Madrigal Singers will present a concert at 7:30 p.m. Thursday, Oct. 31, in Cole Concert Hall in the Wright Music Building on the SFA campus.

NACOGDOCHES, TEXAS - The Stephen F. Austin State University College of Fine Arts and School of Music will present the Madrigal Singers in concert at 7:30 p.m. Thursday, Oct. 31, in Cole Concert Hall on the SFA campus.

The ensemble, under the direction of Dr. Tim King, director of choral activities at SFA, will present "'Tis the Season to be …" The concert, presented in the Halloween spirit, will feature works by Benjamin Britten, Hugo Wolf, Claudio Monteverdi and Jaakko Mäntyjärvi.

Performing with the Madrigal Singers in Britten's "Masque" from his opera "Glorianna" will be Jamie Dahman, new SFA assistant professor of voice, and Susanna Campbell, SFA graduate student in harp.

The Madrigal Singers will also perform Wolf's "Der Feuereiter" (The Fire Rider), which tells the story how the Fire Rider (reminds one of the Headless Horseman) sets fire to a village and the turmoil that results. The ensemble will also perform "Lamento d'Arianna" (Ariadne's Lament) by Monteverdi.

"Monteverdi was the first great opera composer who helped bridge music from the Renaissance to the Baroque," King said, adding that he doesn't know of any Halloween songs from the Renaissance, but there are songs of suffering. "'The Lament' is all that is left from Monteverdi's opera, 'L'Arianna.' It was so popular at the time that Monteverdi arranged 'The Lament' as four separate songs for ensemble."

This performance of the Madrigal Singers is part of the School of Music's Concert Series. Cole Concert Hall is located in the Tom and Peggy Wright Music Building, 2210 Alumni Drive.