Nabb recital to feature works of Saint-Saëns, Ravel and Prokofiev 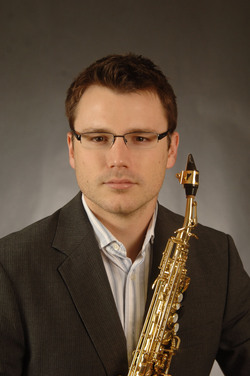 NACOGDOCHES, TEXAS - The Stephen F. Austin State University School of Music will present Nathan Nabb in a faculty recital at 7:30 p.m. Tuesday, Sept. 10, in Cole Concert Hall in the Wright Music Building on the SFA campus.

Nabb, who is associate professor of saxophone in the School of Music, will perform a recital of transcriptions, or music written for other instruments. The concert will feature the works of noted composers Camille Saint-Saëns, Maurice Ravel and Sergei Prokofiev.

"I chose these pieces because I have long admired them for their beauty and craftsmanship, so I decided to 'borrow' them for the evening," Nabb said.

Written in 1921, Sonate op. 167 by Saint-Saëns has become one of the "true standards of the clarinet repertoire," according to Nabb.

"The Saint-Saëns Sonate is very lyrical in nature and works nicely in this setting for saxophone," he said. The piece is arranged by renowned saxophonist and pedagogue Larry Teal.

"Though this piece is originally for solo piano, David Walter adapted it for oboe and piano," Nabb said. "The edition I am performing, arranged by Yeomin Yun, is a similar adaptation for soprano saxophone."

Also featured in the program is Prokofiev's Sonata for flute, which has been adapted for violin (by the composer) and for many other instruments. The version Nabb will perform is for soprano saxophone.

Pianist Chial-Ling Hsieh will perform with Nabb. She is the faculty accompanist and coordinator for the accompanying area at Morehead State University where she also teaches class piano and private lessons. She has appeared as an active solo and collaborative pianist with a large range of repertoire for solo, instrumental and chamber music at recitals and concerts in the U.S. and Taiwan.

The Wright Music Building is located at 2210 Alumni Drive.