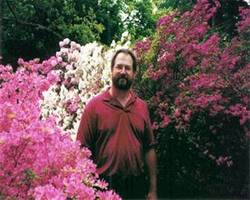 Come learn the practical side of building a new azalea garden or enhancing an existing one with azaleas. John Migas, president of the Azalea Society of America and owner of a design/build landscaping firm since 1998, will share his tried and true methods for developing a historic azalea garden and residential gardens. Bring your plans/ideas/wishes for your own project for Migas to review, and he will provide suggestions for success.

"We are so fortunate to have President John Migas as our 2013 Azalea Symposium speaker," said Barbara Stump, project coordinator for the Ruby M. Mize Azalea Garden at SFA.

"He knows what it takes to develop an azalea garden from A to Z because he's done it many times. He truly loves azaleas and will introduce us to good varieties to try. This visit is very timely, since we have two years to get our gardens ready to show them off when the national Azalea Society of America convention comes back to Nacogdoches."

Migas lives in southwestern Michigan near the shore of Lake Michigan. He has been the national president of the Azalea Society of America since 2011 and has served three terms as the president of the Midwest Chapter of the American Rhododendron Society. He lectures throughout the upper Midwest on topics such as companion planting for azaleas, use of azaleas for garden structure and historic garden renovation.

A carpenter by trade, he caught the plant bug in 1985 when he bought a house next to horticulturist and landscape architect Charles Mann. Mann had introduced rhododendrons and azaleas to the upper Midwest in the 1940s. When Migas visited Mann's garden, his life changed. The garden was the first he'd seen that was full of a choice collection of unusual azaleas and rhododendrons that led the visitor through an English-style formal garden.

In 2004, Migas purchased the Charles Mann property, so it continues as a beautiful azalea and rhododendron garden. Migas has operated Woodlands Nursery, a small nursery, landscape service, and five-acre display garden in the Saugatuck-Douglas-Holland area, since 1998. He grows 250 varieties of azaleas and 150 varieties of rhododendrons and has been hybridizing new varieties for the past nine years.

The lecture will be held from 8:30 a.m. to 3 p.m., and lunch will be provided. Guided tours of SFA's Ruby M. Mize Azalea Garden and the new Gayla Mize Garden, highlighting landscape concepts, will follow.