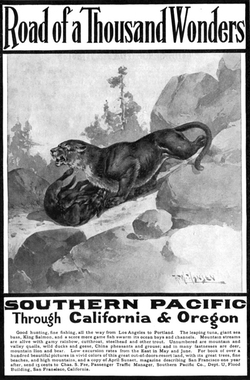 NACOGDOCHES, Texas - An exhibit opening this week at the Nacogdoches Railroad Depot will feature 20th-century railroad advertisements for the American West.

"Advertising the West: Railroad Ads in the 20th Century" is sponsored by Stephen F. Austin State University's Center for Regional Heritage Research and will be open for the summer beginning Tuesday, May 7. The exhibit is free and open to the public.

Railroad companies like Union Pacific and Southern Pacific advertised the American West using wilderness and natural scenery throughout the 20th century, according to Kelly Snowden, research associate for the center. Over time, this scenery was moved to the background of advertisements as railroads developed luxurious amenities for trips across the country, and settlement made the west less wild.

"The exhibit focuses on original magazine ads, many of which are on loan from Loblolly Railroad Group member George Ellis," Snowden said. "The Nacogdoches Railroad Depot is the ideal venue for an exhibit like this, and we hope members of the community will take the opportunity this summer to learn more about this unique aspect of American history."

The Nacogdoches Railroad Depot is located at 101 Old Tyler Road in Nacogdoches. Operating hours are 11 a.m. to 3 p.m. Tuesday through Thursday, and 10 a.m. to 4 p.m. Friday. For more information, contact Kelley Snowden at (936) 468-4405 or snowdenkelle@sfasu.edu.