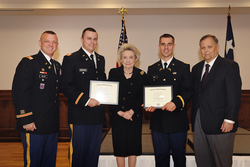 NACOGDOCHES, Texas - The James I. Perkins Family Foundation recently established the Thomas W. Wright Scholarship at Stephen F. Austin State University in honor of a longtime friend and supporter of the university.

"The scholarship honors the late Tom Wright, who was a gentleman of high moral character with a distinguished military career," said Dr. Baker Pattillo, SFA president. "It is a very fitting tribute to Mr. Wright who, along with his wife, Peggy, has made East Texas, Nacogdoches and Stephen F. Austin State University a better place for all."

Recipients of the scholarship must be in good academic standing and members of the Lumberjack Battalion. Preference is given to students who are planning to pursue a military career and who exhibit high moral character and strong leadership skills. The scholarships will be awarded to two students annually.

The first two recipients of the scholarship, 2nd Lt. Charles Maraggia of Carthage and 2nd Lt. Christopher King of The Woodlands, were recognized during the May 10 commissioning ceremony for graduating members of SFA's Army Reserve Officers' Training Corps program. Wright's widow, Peggy Wright, presented the certificates to the scholarship recipients at the ceremony, during which a total of 12 U.S. Army officers were commissioned.

Anyone wishing to donate to the scholarship may send a check payable to the SFASU Foundation with instructions to apply the gift to the Thomas W. Wright Scholarship. Donations should be mailed to P.O. BOX 6092, SFA Station, Nacogdoches, TX 75962.