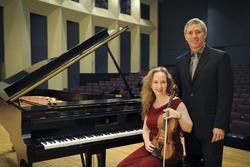 "I chose this theme because I have always loved French music, especially of the Romanic and Impressionistic periods," Dalmas said. "There are such wonderful composers to choose from, with such special and individual voices."

Among the works to be featured are Sonate Posthume by Maurice Ravel, Theme and Variations by Olivier Messiaen, Deux Morceaux by Lili Boulanger and Violin Sonata in A major by Cesar Franck.

"The first half of the program will focus on 'youthful' works written by Ravel, Messiaen and Boulanger when they were all in their 20s - not much older than our students at SFA," Dalmas said. "Even though these compositions are early pieces for these composers, they are all excellent examples of each composer's style.

"The second piece on the program, the Violin Sonata by Cesar Franck, is a piece written in the composer's full maturity," she said, "and is truly one of the greatest examples of violin chamber music, from any period."

Guenther joined the SFA School of Music faculty in 2005. She performs actively in the greater East Texas area, throughout the United States and in Central and South America. She is a founding member of the Gemini Flute duo and plays regularly with the Shreveport, La., Longview, Marshall and Texarkana symphony orchestras.

Internationally renowned flutist Marianne Gedigian, professor of flute at The University of Texas in Austin and former acting principal flutist of the Boston Symphony, will present a recital with collaborative pianist Colette Valentine at 7:30 p.m. Saturday, Feb. 9, in Cole Concert Hall.

Gedigian has been heard on dozens of recordings and the "Evening at Pops" television broadcasts as well as the nationally broadcast Fourth of July specials. She has also been heard on several of John Williams' movie scores, including "Saving Private Ryan" and "Schindler's List." Her solo performances have taken her around the world, including performing recitals in Japan, Australia, England and Armenia.

Valentine, one of the most active professional collaborative pianists in the United States, is on the faculty of the Collaborative Piano Department at UT-Austin's Butler School of Music. As a free-lance musician, she performs with singers and instrumentalists of every variety and has collaborated on recordings for the Albany, Antara, CRI, fontec and Well-Tempered labels.

Tickets for the Cole Performing Arts Series events are $5 for adults, $4 for seniors and $2 for students. For tickets or more information, call the Fine Arts Box Office at (936) 468-6407.