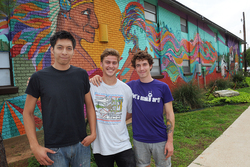 SFA art students, from left, Santiago Escobedo, Levi Smith and Daniel Baugh recently completed a mural depicting the history of Nacogdoches on a brick wall at the Russian River apartment complex on Austin Street. The mural is called "Winds of Change."

Three SFA senior art students spent a few weeks this summer helping to beautify Nacogdoches. Daniel Baugh of Austin, Nacogdoches native Levi Smith and Santiago Escobedo of Carthage teamed up to paint a mural depicting the history of Nacogdoches on a brick wall at the Russian River apartment complex on Austin Street.

Titled "Winds of Change," the project was commissioned by the building's owners and illustrates the progression of Nacogdoches starting with Chief Caddo to the city's current day. The mural is a linear timeline, transitioning from left to right, past to present.

"The owners gave us lots of artistic license," said Smith. "They are in the process of renovating the complex and wanted the mural to help brighten up and call attention to the building and attract tenants. They wanted SFA art students to conceptualize and paint it to show a younger look."

The mural is the group's first commissioned project. However, Baugh painted a smaller mural in the summer at another apartment complex. "I have some friends who live at The Californian," Baugh said. "The lifeguard there also is an art student. He told me the owners were interested in having a mural painted, so I gave him my business card to pass along. One of the owners contacted me a few days later."

The trio said they enjoy working together. In the summer of 2012, they organized a gallery showing at the Burning House in Leggett, Texas. "On the way to Houston, I noticed this really cool structure off U.S. Highway 59," Baugh said. "We learned it was a small art gallery owned by the brother of SFA alumnus and artist Clint Alexander. We contacted Clint about using it, and his brother generously agreed."

The group spent several days preparing the property, and the community showed its support, as well. "People would stop by and help us, and they even brought food and water," Escobedo said. "We had more than 100 people attend the show and sold several pieces of our art."

The Winds of Change project pooled each of the young artist's strengths. According to Smith, Santiago is most talented at drawing people and figures, while Baugh's strength lies in spray painting and what Smith calls 'can control.'

"His lines are impeccable. The artist doing the spray painting must complete the outlines. If those are off, the whole mural is off," Smith said. "It's kind of like starting with a skeleton and adding in the meat." Baugh said that Smith is the "building artist" of the trio. "Anything that involves architecture, Levi can draw it."

Although the project was fun for the most part, it did present challenges. Painting a project of this scale involves lots of prep and cleanup time. Escobedo points out that a two-hour block of painting time is quickly consumed with erecting scaffolding and preparing the paint, brushes and rollers. You also have to figure in the same block of time to put everything away.

Another problem the group encountered was grout lines. "The inset of the grout was very deep on this structure," Baugh said. "It took much more paint than I had estimated and a lot more time to fill them in. They had to be done with a brush."

The three artists are quick to point out that, although the project had its obstacles to overcome, the reward in completing a project like this is the positive relationship formed with the community.

"When we first started on the mural, we'd have people stop by, and they were unsure about what we were doing and how this was going to affect their neighborhood," Escobedo said. "As we progressed, those same people would come by, and as they watched and interacted with us, they began to feel part of it."

Another positive outcome of the mural is it is artwork all people can enjoy. "Not everyone will go to an art gallery," Smith said. "An outside mural is a way to take you to a different place and let you enjoy art without having to buy a ticket. You don't have to dress up or make a several-hour commitment to view it. People embrace it, and it becomes part of the neighborhood."