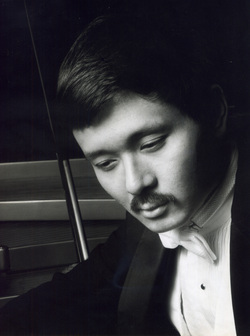 Tamagawa, who is professor of piano at Southwestern University in Georgetown, has performed as a soloist and collaborative pianist throughout the United States and in seven foreign countries.

His collaboration with the late violinist Eugene Fodor resulted in more than 30 recitals and a CD of violin and piano music, "Witches' Brew." Their performances took them across the United States and also included concerts at the National Center for the Performing Arts in Mumbai, India, and the Festival Internacional Cervantino in Guanajuato, Mexico. He has performed at Weill Recital Hall, Merkin Hall and Bargemusic in New York, and Wigmore Hall in London. The Texas Music Teachers Association named Tamagawa the 2013 Collegiate Teacher of the Year.

Parr described Schubert's piece as "a work of considerable length, which contains wonderfully enjoyable themes brimming with Viennese charm and subtlety," and he characterized "China Gates" as "a quietly atmospheric piece in minimalistic style."

"American composer Samuel Barber's Piano Sonata, Op. 26 is one of the most important piano works of the 20th century," Parr added.

The Tom and Peggy Wright Music Building is located at 2210 Alumni Drive on campus.