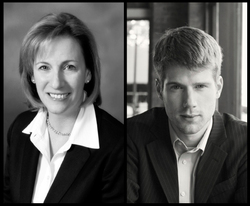 NACOGDOCHES, TEXAS - The Stephen F. Austin State University School of Music will present Catharine Lysinger and Alex McDonald in a duo piano recital at 7:30 p.m. Friday. Sept. 20, in Cole Concert Hall in the Wright Music Building on the SFA campus.

Lysinger, who is senior lecturer in piano and pedagogy and piano at Southern Methodist University's Meadows School of Art and artistic director of the piano preparatory department, and McDonald, who teaches piano at Texas Women's University, will present "Twice the Impact: Music for Two Pianos."

Among the pieces on the program are works by Johannes Brahams, Witold Lutoslawski, Wolfgang Amadeus Mozart, Achille-Claude Debussy and Franz Liszt, according to Andrew Parr, professor of piano in the School of Music.

"Brahms's Variations on a Theme by Haydn, Op. 56a is a perfect balance of the interplay of melodies between the pianos and the richness of resonance gained by adding the second instrument," Parr said in describing what he called a "noble piece."

Lutoslawski's Variations on a Theme by Paganini uses a familiar violin theme made famous by Liszt's variations for piano, Parr explained. The Lutoslawski piece is "written in an enjoyable and virtuosic 20th-century idiom," he said.

Lysinger is a prizewinner in national and international piano competitions, including first prize in the Music Teacher National Association National Young Artist Competition and first prize in the Wideman International Piano Competition. She is an active soloist, chamber musician, and lecturer, and has performed as a soloist with the Filarmónica de Jalisco (Guadalajara, Mexico), the Lubbock Symphony Orchestra, The Houston Civic Symphony and the Clear Lake Orchestra. Recently selected as Teacher of the Year by the Dallas Music Teachers Association, Lysinger was also nominated for the SMU Provost's Teaching Excellence Award. Many of her students have been awarded first prize in prestigious competitions across North Texas.

McDonald has soloed with the Orquesta Sinfónica del Estado de Mexico, the Louisiana Philharmonic, the Fort Worth Symphony Orchestra, and the Utah Symphony Orchestra, among others. He has performed across the United States as well as in Israel, Canada, South Korea, and Japan, where he has also organized relief concerts for displaced survivors from areas ravaged by the Tohoku earthquake and tsunami. Additionally, he has been a featured performer on PBS, WRR, NPR, and WQXR. McDonald was the second prize winner of the 2007 New Orleans International Piano Competition and was the first Texan in more than 30 years to be accepted into the Van Cliburn Competition.