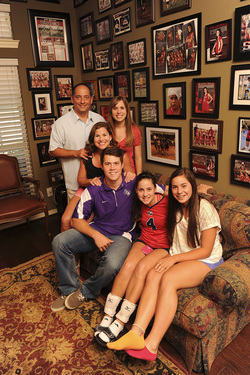 SFA football player Joe Minden and his family at their home in Coppell.

Rosie didn't get mad when she was three months pregnant and doctors diagnosed her husband, Ted, with leukemia. Six months later, when their son, Joseph, was born, Rosie brought him home from the hospital and began to care for him and his older sister, while at the same time helping her husband deal with the effects of chemotherapy. She changed her baby's diapers and her husband's IV bags and did not question her faith in God.

When Ted died the day before their son's first birthday, she did not lose heart. The next day, with relatives gathered near to assist with funeral arrangements, they served Joe's birthday cake, opened his presents and were thankful for the gift of family.

But there was anger three months later, when a doctor told Rosie that Joe had a tumor, that it was an aggressive form of cancer related to the leukemia that had taken her husband. There was fury when the doctor said she should prepare herself because, in all likelihood, her baby would die.

"I stood up and said to him, 'How dare you say that? You are not God, and you can't know that for sure. Don't you dare take my hope.'"

Lumberjack football player Joe Minden knows his mother faced two of the worst nightmares of every wife and mother.

"It had to be tough," the Coppell native said. "It's amazing how strong and courageous my mom is - just to go through that and still be the loving and happy person she is. It's pretty cool that she faced adversity and it's like she just stomped all over it. She kept going and found the brighter things in life. She got through it, and I look up to her for that."

Rosie had help from her teaching colleagues. One wanted to introduce her brother to Rosie, but the brother, Michael Speanburg, had different ideas. "The whole group of teachers at the school was trying to fix me up with Rosie. I knew she had lost her husband, but I didn't know the details," he said. "I was young and traveling a lot, so I told my sister, 'I like being single; I don't want a girlfriend.'"

Everything changed when Michael met Rosie in person.

"One of the things that I really loved about Rosie was how strong she is. She is very determined and just has a very big heart; and I was thinking, 'If she can go through all these hurdles in life, then she can put up with me.'"

So the guy who wanted to be single became a husband and father of two. He helped Rosie deal with Joe's cancer treatment, driving him to Houston for doctor's appointments.

"Michael was right there through the whole thing," Rosie said. "Somebody else would have turned around and run, but he helped me get through it, along with my mom and dad. My brothers and sisters helped me with my daughter, Elaine. We all stuck together."

Michael has no regrets about ending his bachelor days sooner than planned.

"As the relationship got stronger, some of my friends were looking at me like I'd been hit in the head with a 2-by-4," Michael said. "At the end of the day, I'm the luckiest one of all; I'm the one who's blessed because they came into my life."

Joe is equally grateful that Michael was willing to be a dad.

"He's one of my best friends. He is always there to support me, and he's the person I get my competitive spirit from. We are always playing games, always competing with each other. He taught me to throw the football. He's been a huge influence."

Joe's brush with cancer, conquered with surgery and chemotherapy, is not the only medical battle he has faced. During a junior high football game, he suffered a knee injury that could have been career-ending.

"I was playing receiver in seventh grade and blocking the corner in front of me," Joe recalled. "I knew the running back was coming behind me, but I didn't know how close he was. The pile to tackle was going on behind me and my leg got rolled on. I couldn't feel it, but I knew something was wrong with my knee. They got me to the bench, and I was sitting there trying to figure out how much longer it would be until I could get back in that game."

It would be more than a year before Joe got back in the game. His kneecap was broken, and the tendon that connects the kneecap to the tibia was torn. "The doctor told me that, unless I had surgery, I would not be able to play sports again, at least not the same way I did beforehand," Joe explained. "He said that my knee might not ever be the same."

After surgery, Joe used an ice machine for two weeks, then for six weeks, a machine bent his leg continuously - 18 hours daily - gradually and painfully increasing the range of motion. "I would just sit there and watch my leg go back and forth, back and forth," Joe said. "I would constantly tell myself, no matter how badly it hurt, that I wanted to get back to where I was. I didn't want my story to be that an injury kept me from playing. I didn't want to quit."

Joe was on crutches for two months and missed 34 days of school. "It was like taking care of a 150-pound infant," Rosie said. "He couldn't get up or down, and the doctors pretty much told him he wasn't going to be able to play sports again. Try telling that to a 13-year-old boy."

Nine months after the accident, Joe was released to run again, but not for contact sports. When he finally was allowed to return to the field, Joe wore a brace to protect his knee. "I wasn't as fast as I had been, and I wasn't strong," he admitted. "The biggest obstacle I had to face was keeping a positive mindset, looking on the bright side and knowing that eventually I was going to get back to where I wanted to be. It took a few years, but eventually I got to the point that I was confident in my ability and what I was able to do on my knee."

Joe led his Coppell High School football team to the state playoffs his senior year, receiving first-team all-district honors and setting the single-season record for passing yards and touchdown passes. The quarterback was named the 2010 ESPN Rise Most Improved Player.

As a Lumberjack, Joe played in five games during the 2012 season, completing 61 of 108 passes for 569 yards and two touchdowns.

"We load up in the car all decked out in purple," Rosie said of the family's SFA game-day routine. "We are probably the first ones to get out to the field because I don't even want to miss warm ups. They call me 'stalker' because I just watch Joseph, and I'm going to stare him down until he waves at me. Whether he's on the field or on the sideline, I'm just excited to see him."

The Speanburgs said what attracted them to SFA was honesty during the recruiting process and the emphasis placed on academics.

"The coaches were very honest, and that won my wife's heart over," Mike explained. "Coach (Chris) Truax said Joe probably wouldn't play his freshman year; he would probably be redshirted. He was honest, and we knew we couldn't say that about recruiters from other schools. When we left Nacogdoches, my wife had peace."

According to Rosie, that sense of peace remains.

"I have had nothing but a sense of safety with him being at SFA. If I have a question and call up, they are going to put me through to someone to answer my questions. If Joseph is sick, I know he can go to the trainer, and they will take care of him. I miss him, but I don't worry because I know they are looking out for him."

SUCCESS IN THE CLASSROOM

With a 3.9 grade-point average, Joe, who recently was named the SFA finance department's outstanding student, said he approaches classroom assignments with the same attitude he has on the football field. "I do the best I can, even if it's just a minimal assignment," he said. "In football you have to do the little things right, whether you're working out or on the field. Those little things can make a difference between winning and losing - between doing well and not doing well."

Most people who meet Joe don't know about his medical history. But even the casual observer may discern that there is something different about Joe, something that compels him to set goals and meet them.

"I don't tell people about any of this because I don't want anyone to expect less from me," Joe said. "It's not that I don't want people to know - I just want them to know me for who I am now. I feel accomplished, but I am not done yet. There's a lot more I want to do."

The same spirit is evident in the Speanburg household. Where there could be anger, self-pity or a lack of confidence, there is joy, hope and resilience. Personal fortitude and accountability are unspoken expectations.

"I think the experience my family and I have gone through is in our hearts; it's in our core," Joe said. "When I face a challenge, I don't sit back and have a pity party for myself and think that I've already been through so much. How can you not be happy about life? It is a precious thing."

Joe is not the only standout athlete in his family. His older sister, Elaine, played volleyball at Southwestern University, and his younger sisters, Maddie and Morgan, are athletes at Coppell High School.

"Rosie's strong educational background has a lot to do with this," Michael said. "They know that if their academics aren't taken care of, they are not going to go out and play, and they are sure not going to play sports. They have a great balance because of Rosie; she really is the anchor of this team."

Although Rosie's hope dates back to before the birth of her son, she credits Joe with her spirit and positive attitude.

"Joseph has been my hero. If I ever feel like I'm a failure, I look back and think of all the things he's overcome, and he's done it with a smile on his face and determination. And I just think, 'You know what? I'm going to be like that, too.' So he's my hero, my role model; he's my miracle baby. And I thank God for all the blessings that I've had. When there's adversity that we have to get through, something good always comes of it. Sometimes it's difficult, and I don't understand why, but I know that when I look back, there will be a reason. This just helps us all to grow and see something that's part of our plan." 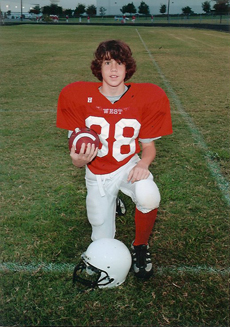