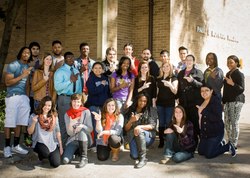 The winning team's advertising ideas may be used by the national client, Glidden Paint, in partnership with Walmart. The team, well-known for its creativity, won the "Best Promotion" and "Judge's Special Recognition" awards at last year's competition for its work with Nissan.

The students, all members of SFA's AdHoc organization, hail from the art, marketing and mass communication departments. The team has been working on its entry since last semester, conducting research, brainstorming, analyzing data and creating a one-of-a-kind ad campaign. Creatively combining art, social media, radio/television, public relations, fundraising, and budget and evaluation plans, the Ad Team submitted its proposal detailing the campaign in March.

Presenters were chosen by the more than 30 advertising students who created the campaign. Candace Hartsell, Blake Williams, Kim Jenkins, Ian Iversen and Atalie Walding have been preparing for the presentation before a panel of advertising experts in Tulsa.