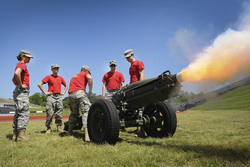 If you've been within earshot of Homer Bryce Stadium on a Saturday afternoon in the fall, you've probably heard it - the kaboom of cannon fire punctuating the spirited strains of the SFA Fight Song. The source of the blasts is Ol' Cotton, a World War II-era 75-mm mountain howitzer that is positioned in the south end zone for each home game and fired every time SFA scores. With each blank charge that explodes, a burst of orange flame is visible an instant before a discharge of light grey smoke unfurls into the end zone and dissipates over the cheering crowd.

Garbed in red T-shirts and camouflage pants, the Lumberjack Battalion's Cannon Crew is responsible for loading and firing Ol' Cotton with every SFA touchdown, extra point and field goal. But a lot of sweat and elbow grease is needed to get Ol' Cotton ready for action each summer, and those duties fall to Ret. Lt. Col. John D. "Mad Dog" Mosele '74. The retired U.S. Army officer and Austin Raider emeritus has a soft spot for the historic piece of artillery, which was acquired by the ROTC program during his time at SFA.

"I started working on it several years ago because, after many years of being stored outdoors, the elements had taken a toll, and it was getting to the point that it wouldn't be operational much longer unless it was restored," said Mosele, who is a member of the Military Vehicle Preservation Association. With the help of some retired military friends, a sledgehammer, a logging chain and "about $200 worth of degreaser," Mosele was able to separate the cannon's barrel from the breach block where it had been immobilized by a combination of rust and pine sap.

"Up until that point, I really thought we might not be able to salvage it, but we were able to get it apart to clean and repair and paint it that summer," he said. Since then, Mosele has taken Ol' Cotton back home to his family farm near Garrison for cleaning and repair before the start of each football season. "It has taken a few years, but she is now in really good shape for her age and should be operational for many years to come."

Ol' Cotton is named for Ret. Lt. Gen. Orren R. "Cotton" Whiddon of Lufkin '55, the most senior military officer ever to have graduated from SFA and a longtime supporter of the university's military science program. At the time of his retirement in 1989, Whiddon was commanding general of the Second U.S. Army. His numerous awards and decorations include the Bronze Star, Meritorious Service, Defense Superior Service and Army Commendation medals. Whiddon was inducted into the SFA Alumni Hall of Fame in 1988.

"Very few other universities in the country are fortunate enough to have a working howitzer on their campus," said Lt. Col. David Miller, chair of the Department of Military Science. "The camaraderie and esprit de corps that surrounds the Ol' Cotton tradition - not just for our cadets but for all SFA students, as well as alumni - is a unique part of our history that we are privileged to enjoy." 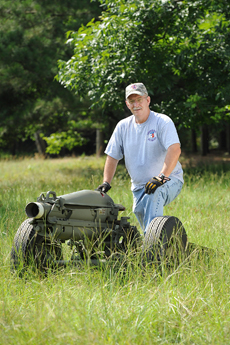 Ret. Lt. Col. John D. "Mad Dog" Mosele, a 1974 graduate of SFA, volunteers his time each summer to clean and refurbish the cannon.