NACOGDOCHES, TEXAS - A number of scholarships and grant awards presented annually through the Stephen F. Austin State University School of Art were announced earlier this year. SFA School of Art Director Christopher Talbot announced the following recipients of the 2013-2014 art scholarships during the opening of the SFA Art Alliance Spring Show:

The following awards were given by the Friends of the Visual Arts: 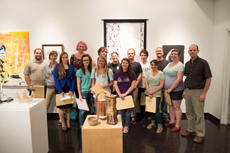