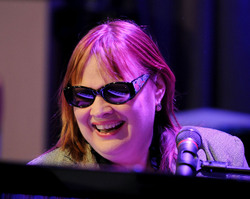 Jazz legend and Grammy award-winning artist Diane Schuur is among the featured performers in the SFA College of Fine Arts' 2013-2014 University Series, "Live Out Loud."

"Designed to bring quality fine arts experiences to East Texas, the series consists of five highly acclaimed touring groups and four university-produced performances," said John W. Goodall, associate dean of the College of Fine Arts. "Also included on the series, but at no cost to the patrons, are four outstanding art exhibitions at The Cole Art Center @ The Old Opera House."

The season begins Thursday, Sept. 12, with celebrated pianist Christopher O'Riley and renowned cellist Matt Haimovitz as they present "Shuffle.Play.Listen." - a collaboration that crosses in and out of the classical and pop music genres.

Beginning Tuesday, Oct. 8, and continuing through Saturday, Oct. 12, the SFA School of Theatre will present "Dead Man's Cell Phone" by Sarah Ruhl. The play is an imaginative comedy about a woman confronting her assumptions about morality, redemption and the need to connect in a technologically obsessed world. This play is recommended for mature audiences.

Under the artistic direction of Troy Powell, the talented young dancers of Ailey II will perform Thursday, Oct. 17. The Ailey spirit shines as this critically acclaimed company presents an exhilarating and diverse repertory of timeless classics and thrilling new works.

The first University Series art exhibition of the season opens Nov. 1 with "Día de los Muertos: The Art of the Living and the Dead," an exploration of traditional Day of the Dead altars as well as a reinterpretation of the same through different cultural, ethnic and religious/non-religious perspectives. The exhibition runs through Jan. 4.

An exhibition of John August Swanson serigraphs opens Nov. 9 and runs through Jan. 11. These images reflect the strong heritage of storytelling Swanson inherited from his Mexican mother and Swedish father.

Vocalist, pianist and jazz legend Diane Schuur will perform Friday. Dec. 13. Schuur has built a stellar career by embracing not only the jazz of her parents' generation, but also the pop music of her own youth during the late 1950s and '60s.

An exhibition of "Texas Art Quilts 1993-2011" will open Jan. 14 and run through March 30 and features 26 works by Texas artists. The exhibition comes to Cole Art Center from the Texas Quilt Museum and embraces both abstract and representational modes.

On Thursday, Feb. 6, The King's Singers, a British all-male a cappella group, will bring their impeccable vocal blend, flawless articulation and incisive timing to SFA. Having performed across the globe in some of the world's most famous concert halls, this celebrated ensemble is considered "a class act with a delightfully British wit."

The SFA School of Theatre will present "Blood Wedding" by Federico Garcia Lorca Feb. 25 through March 1. This classic tale of passion, conflicting loyalties and vengeance, recommended for mature audiences, plays out to an inevitably tragic conclusion.

The SFA Schools of Music and Theatre will showcase their talent March 27 through 29 with one of the masterpieces of operatic literature (title to be announced in the fall). Director Deborah Dalton, associate professor of voice, said the production each year features SFA's outstanding student singers accompanied by orchestra and staged with full set and costumes.

On Thursday, April 3, spend an evening immersed in jazz with the award-winning SFJAZZ Collective, a workshop band unlike any other in jazz. The group features a changing lineup with each member hand-selected to contribute his own unique sounds, styles and voices. This 10th anniversary season of the group features the music of Horace Silver, Stevie Wonder, John Coltrane and more.

An exhibition of the drawings of American artist Jerome Witkin will open April 14 and will coincide with the Texas National 2014 Competition and Exhibition, with Witkin serving as juror for the competition. Witkin is recognized as one of the most formidable figurative painters working today. The Witkin exhibition and Texas National will run through June 14.

The final offering of the 2013-2014 season is a performance of jazz great Wayne Bergeron performing with the SFA Swingin' Axes Thursday, April 24. Bergeron is a much sought-after trumpeter who is enjoying a career as one of the most active players in the world with studio dates, international touring, jazz concerts and guest solo appearances.

All of the concerts and staged productions on the University Series will begin at 7:30 p.m. in W.M. Turner Auditorium with reserved seating.

The University Series art openings will be announced at a later date, with the exception of Texas National and the Witkin exhibition, which will have an opening reception at 6 p.m. April 12. Regular hours for The Cole Art Center @ The Old Opera House, located at 329 E. Main St., are 12:30 to 5 p.m., Tuesday through Friday, and 10 a.m. to 5 p.m. on Saturday. Admission to all exhibitions is free.

Season tickets for the University Series are now on sale through the Fine Arts Box Office. They range from $135 to $200, with discounts available for seniors, students, youth and SFA faculty and staff.

"These are fantastic prices for quality entertainment," exclaimed Diane Flynn, Fine Arts Box Office manager. "Season tickets provide a 25-percent savings over single tickets, and patrons can have their same seat throughout the season.

"Plus, we offer two season ticket options," she said. "The classic package includes one ticket to each of the nine performances, and the TixMix package allows the patrons to create their own nine-ticket season."

Single-event ticket purchases for the University Series or any of the other performances presented through the College of Fine Arts can be made beginning Monday, Aug. 19.