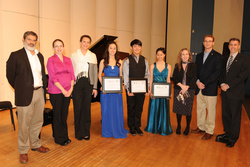 NACOGDOCHES - The Stephen F. Austin State University School of Music has announced the winners of the 2013 Schmidbauer International Young Artist Strings Competition held Jan. 19 and 20 on the SFA campus.

From a pool of international applicants, 10 semi-finalists in two age divisions were selected to compete in the two-day event.

Hans Kristian Goldstein, a cellist studying at the University of Southern California, was awarded the $5,000 first prize in the Senior Division (ages 19 to 27). The native of Oslo, Norway, will receive an additional $2,500 when he returns to SFA during the 2013-14 academic year to perform Antonín Dvorák's Concerto for cello and orchestra in B minor with the Orchestra of the Pines.

Cellist Dmitry Volkov of Russia, a graduate of the Moscow Tchaikovsky Conservatory now pursuing an artist diploma at the Peabody Institute, received the second place prize of $3,000. Cellist Vardan Gasparyan of Armenia, a performance diploma candidate at The Colburn School Conservatory of Music in Los Angeles, Calif., received the $2,000 third prize.

In the Junior Division (ages 15 to 18), South Korean cellist Charles Seo, who attends the Houston School of Performing and Visual Arts, won the $1,500 first prize; Evin Blomberg, a violinist studying at The Colburn School Conservatory of Music in Los Angeles, Calif., won the $1,000 second prize; and violinist Lillian Lee won the $750 third prize.

Senior Division jurors were Carter Enyeart, one of the leading artists/teachers of cello in the nation; Dr. Misha Galaganov, chair of strings and viola professor at Texas Christian University; and Kenneth Goldsmith, professor of violin at The Shepherd School of Music.

The Schmidbauer Competition, which is made possible by the generosity of George and Peggy Schmidbauer, alternates annually between pianos and strings. 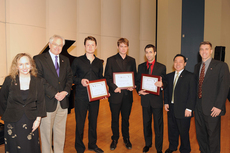